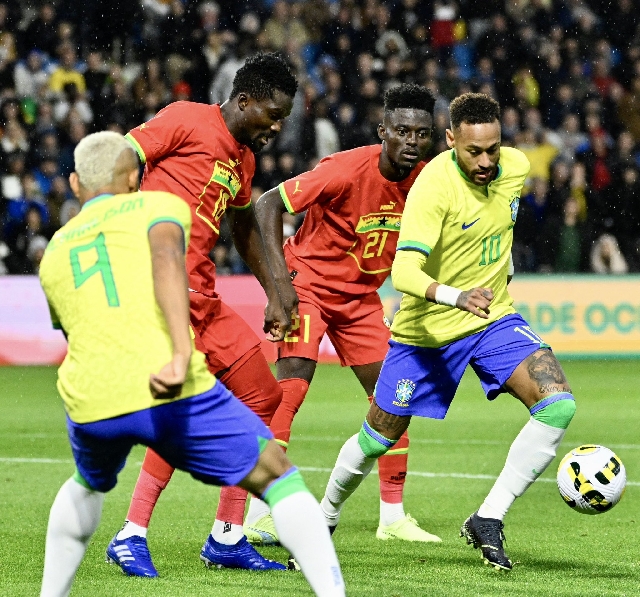 Brazil extended their winning run to 14 games when they beat the Black Stars of Ghana 3-0 in a pre-World Cup friendly at Le Havre, France on Friday.

The number one ranked team in the world were convincing and exciting to watch in the first half as all three goals came in the first 45 minutes.

Marquinhos got the opener for Brazil just eight minutes into the corner when he headed home from a corner kick after poor marking by the Ghanaians.

Tottenham’s Richarlison scored a brace with a 28th minute carpet shot that beat goalie Joojo Wallocot with an assist from Neymar Jnr and a header in the 40th minute from Neymar’s free kick on the left wing.

Brazil safest pair of hands Alisson Becker was on complete holiday as the Black Stars barely tested him.

Ghana’s only clear chance in the game came in the 54th minute when captain Andre Morgan Rami Ayew’s header from a corner kick hit the cross bar after Alisson was completely beaten.

Ghana was a better side in the second half with series of substitutions from Coach Otoo Addo.

Inaki Williams made his debut when he replaced Kamal-Deen Sulemana.

The Black Stars will travel to Spain to play Nicaragua on September 27.

In this article:Brazil hammer Ghana 3-0,in Qatar 2022 friendly