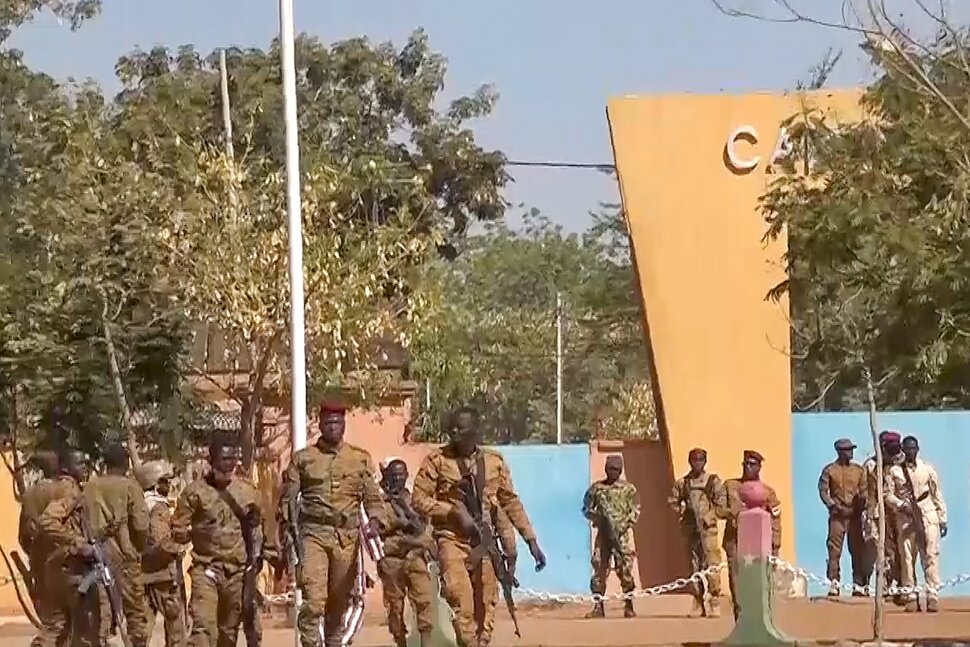 In address on state television, mutinous soldiers say they have dissolved the government and suspended the constitution.

Captain Sidsore Kader Ouedraogo, centre, spokesman for the military government, with uniformed soldiers announced that they have taken over power in Burkina Faso.

They announced that they have taken over government, the national assembly, and suspended the constitution, seizing control of the country after two days of unrest at army camps in the capital.

The announcement, signed on Monday by Lieutenant Colonel Paul-Henri Sandaogo Damibaand read by another officer on state television, said the takeover had been carried out without violence and those detained were in a secure location. The country’s borders have also been closed, it added.

The statement said the MPSR would re-establish “constitutional order” within a “reasonable time”, adding that a nationwide nightly curfew would be enforced.

Meanwhile, Security Consultant Richard Kumadoe says General insecurity in West Africa is becoming a major concern for the onlookers, especially those who drives investment into the region, and member States.

According to him, military take overs, and governance inconsistencies is almost at the tipping point, the SHELL REGION is boiling with devastating deviations and effects, what will be the repercussions and the ripple effects on the West Coast?

Strategic Security Management is key, effective governance and national leadership is crucial to curb further escalation of the disturbances and the insecurity issues surrounding member countries.

He noted that border control management, surveillance and creative thinking in the area of security intelligence, dialogue and communication among member countries, at the highest levels of leadership and governance should be embraced and effectively managed.

“The gods are tired of warning the living and the ears of those who listens are becoming dull and boring. We should, and must overcome one day soon”, Richard Kumadoe
Security Consultant said.