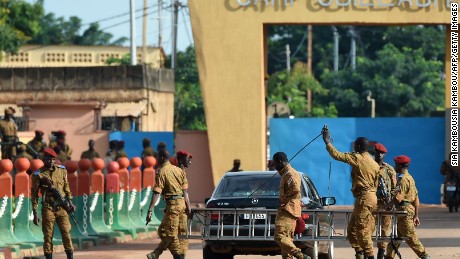 Events of political instability unfolded in Burkina Faso, where the military announced Monday that it had seized power after they arrested and detained President Kaboré in Francophone West African country.

Below is the blow-by-blow account of how it all happened:

On Saturday, January 22, 2022, incidents broke out in Ouagadougou and other cities in Burkina Faso between the forces of order and demonstrators who once again defied a ban on gathering to protest against the powerlessness of the authorities in the face of the jihadist violence that has ravaged the country since 2015.

Sometimes mixed with inter-communal clashes, jihadist violence has killed more than 2,000 people in the past six years and forced 1.5 million to flee their homes.

On Sunday, January 23, shots rang out in several barracks in the country: in the Sangoulé Lamizana camp, west of Ouagadougou, in the Baba Sy military camp, south of the capital, at the airbase near the airport, as well as in the barracks of Kaya and Ouahigouya (north).

Camp Sangoulé houses the prison where General Gilbert Diendéré, a close associate of former President Blaise Compaoré who was overthrown in 2014, is being held. Sentenced to 20 years in prison for an attempted putsch in 2015, General Diendéré is currently on trial for his alleged role in the 1987 assassination of former president Thomas Sankara.

The government of President Roch Marc Christian Kaboré acknowledges the shooting, but denies “a takeover by the army.”

The government claims that institutions are not threatened “for the moment. Since mid-January, several soldiers have been detained for allegedly “attempting to destabilize institutions.

Mobile internet is cut off.

Mutinists’ supporters set fire to the headquarters of the ruling party in Ouagadougou, before being dispersed by the police.

Outside the Sangoulé Lamizana barracks, some forty soldiers fired into the air near several hundred jubilant supporters.

The perimeter around the airbase barracks was also cordoned off by hooded soldiers firing into the air.

Demands of the mutineers

The mutinous soldiers are demanding the “replacement” of the army chiefs, “adapted means” in the fight against jihadist groups, as well as better care for the wounded”, according to an audio recording sent to AFP. However, they did not demand the departure of the president.

In the afternoon, discussions took place between representatives of the mutineers and the Minister of Defense.

On the evening of 23, the president decreed a curfew. The Ministry of Education announced that schools would remain closed for the next two days.

Shooting near the President’s residence

At the end of the day, gunfire was heard near the president’s residence, as well as in the Sangoulé Lamizana and Baba Sy military camps.

The president was arrested and detained at the Sangoulé Lamizana barracks, along with the head of parliament and ministers, according to security sources.

But, according to a government source, the president was “exfiltrated” from his residence on Sunday evening by gendarmes of his guard “before the arrival of armed elements who fired on the vehicles of his convoy.

On Mr. Kaboré’s Twitter account, a message posted on Monday called on “those who have taken up arms to lay them down in the best interests of the nation.

The African Union (AU) strongly condemned the “coup attempt” while Kaboré’s party denounced an “aborted assassination attempt” on the president.

The EU and the United States called for the release of President Kaboré.

Military announce they have taken power

Uniformed soldiers announced on national television that they had taken power, pledging a “return to constitutional order” within “a reasonable time.

A captain read a communiqué from Lieutenant Colonel Paul-Henri Sandaogo Damiba, who also announced the closure of borders, the dissolution of the government and the National Assembly, and the suspension of the constitution.

UN Secretary-General Antonio Guterres “strongly” condemned the military “coup” and called on the perpetrators “to lay down their arms” and protect the “physical integrity” of the president.