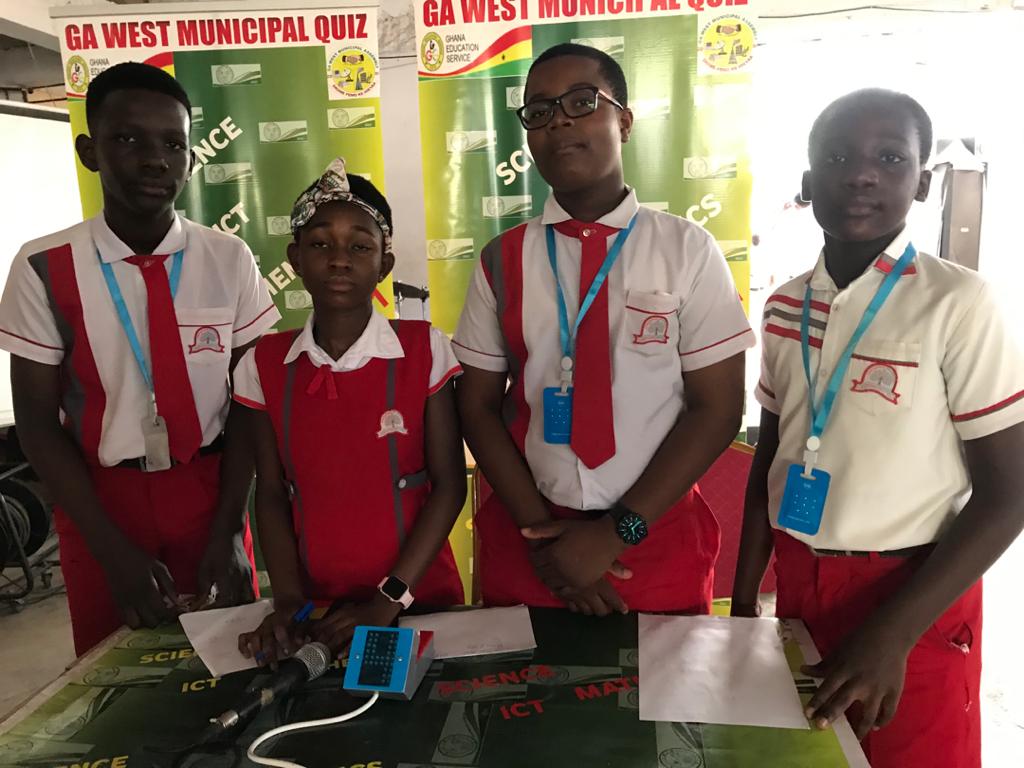 According to CEO of Cherryfield Montessori School, Madam Magdalene Dzifa Adzanu, the school is poised for victory and will give competitors a run for their money on Friday.

Speaking to the media after 2021 GA West Municipal BSTEM Quiz Competition for Private Schools finals on Friday 6 August, Madam Magdalene Dzifa Adzanu says a lot more strategy is being mapped up by her outfit to win the ultimate trophy.

Contestants who put up the splendid performance to make the Pokuase ACP-based Cherryfield Montessori School proud include Jude Obadai Mensah-Daapah, Lawrencia Amoako, Daniel Owusu-Boateng and Nana Kwasi Poku Boadu. They were on top of issues, sweeping most of their main and bonus marks, putting up strong fights against their competitors.

Speaking after 2021 GA West Municipal BSTEM Quiz Competition Private Schools Finals on August 6, Chief Executive Officer of Cherryfield Montessori School Madam Magdalene Dzifa Adzanu said “the competition was keenly contested for by all schools present at the auditorium. The grande finale for GA West Private Schools in the municipality was Organized today. So the winners from two schools would represent GA West including the Public school which would be next week Friday. At the inauguration, I remember saying that the competition would not be a problem for us. We started by given our opponent a run for their money. We won the first competition with 106:42 points. Today’s competition was also another milestone in the lives of our contestants and Cherryfield Montessori School”.

With these impressive performances, Cherryfield Montessori School and Child Care and Development Centre are expected to battle it out with two public schools namely : St. Sylvanus R/C Basic School and Nsakina M/A Basic School on Friday August 13, 2021 to determine who lift the ultimate trophy.

The CMS Boss Madam Magdalene Dzifa Adzanu noted that” Cherryfied Montessori School polled 108.5 from all the six schools that represented. We had the highest score of 108.5 marks and the school that followed had 92 marks. This equally was not a bad result even if it was half a mark. We would have won. So we should say that it is a keenly contested competition and we are ready to bring the cup to Cherryfield Montessori School and we are on course. Where we have reached now, we just need to do more preparation, we have to encourage the Students, our teachers will be up and doing and everything would fall in place”.

Madam Magdalene Dzifa Adzanu told the media that “We aren’t falling at all. It’s a competition and our opponents are there to give a tough contest and we also equally prepared. Still the gap is reasonable. The competition started with more than 100 schools and we have managed to reach this place and we are still maintaining our pace which is very good for us. We’re interested in winning. As to how the marks would come about, all we have to do is to get our maximum points, simple! That’s our strategy and we should be very attentive and very alert”.

“The learners are very prepared, facilitators are on point. We are not loosing guard at all. We are simply prepared for anything in the competition whichever way it may come, bcause of the broad nature or holistic way we trained them . They think fast on all directions. Whichever way it goes we should win”

“Our final competition would be next week Friday, where we would meet two public schools and we have to battle it out with the schools and the winner would be declared on Friday. We are expecting victory. We have raised high the flag of Cherryfield Montessori School. They should not expect anything less than victory. We have mounted a strategy after today’s contest, we have started camping . We are on vacation but students are ready for victory so they are sacrificing likewise the teachers. Our competitors should watch out. Already they hare been afraid of us, nobody wants to meet Cherryfield, they should be prepared. We want a very high competition they should be ready. We would take the cup”.

Please, watch the video of CMS upon victory, with the excitement on higher notes led by Assistant Headmaster Mr. Victor Opoku :

With one more competition to the ultimate trophy, CMS which is determined to hold grounds against key competitors is lacing its boot to stamp victory at the final intellectual battle against St. Sylvanus R/C Basic School and Nsakina M/A Basic School (public) and Child Care and Development Centre on Friday August 13.

Below are exclusive pictures from the Competition: