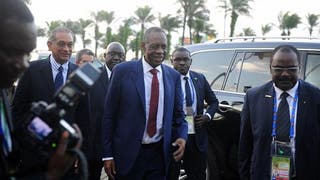 On Friday, Cameroonian Issa Hayatou won an appeal ruling which overturns his ban by FIFA.

The Swiss Court of Arbitration for Sport said, on Friday, it upheld Hayatou’s appeal since “there was insufficient evidence” of misconduct. The court announced its verdict on the eve of the final of CAF’s marquee African Cup of Nations tournament hosted in Hayatou’s home country, Cameroon.

Hayatou was banned for one year after following an alleged breach of “duty of loyalty” rules.

Last August , a Fifa investigation concluded the 75-year-old man had signed an anti-competitive 12-year deal worth about $1 billion. The agreement signed with France-based sports agency Lagardère which gave exclusive rights to CAF competitions including the Cup of Nations and African Champions League through 2028.

The court said its panel of three arbitrators, who held a hearing by video link in December, also ordered FIFA to contribute to Hayatou’s legal costs. It also overturned a fine of 30,000 Swiss francs ($33,000).

The FIFA case did not affect Hayatou’s honorary membership of the International Olympic Committee. He got honorary status after his 15-year membership ended in 2016.

Hayatou was the president of CAF for 29 years until being unseated in a 2017 election where his opponent was supported by FIFA president Gianni Infantino.