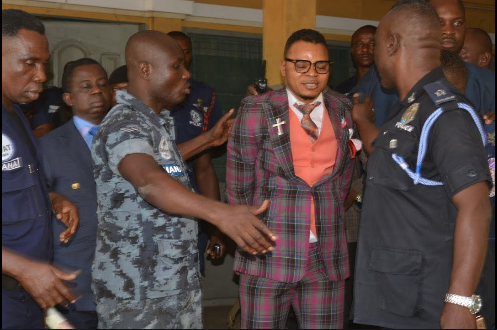 The attention of the police was drawn to a video in which a Toyota Land Cruiser with registration number GR 5150 – 22 was captured fitted with strobe lights and a siren contrary to road traffic regulations 74 (1) of Road Traffic Regulation 2012 LI 2180.

The police said its investigations, after reviewing the footage, led to the arrest of the driver and Bishop Obinim.

The two were arraigned today.

The court ordered them to remove all unapproved strobe lights and sirens on the vehicle.

Under the supervision of the police, the strobe lights and sirens were removed and retained by the police.

The police has appealed to car owners to stop fixing strobe lights and sirens on their cars.

The police said car owners who flout the law will be prosecuted.

The controversial preacher was arrested several times with the matter pending before court. The latest fine is one out of many cases in court.

In 2014 Obinim was seen on television stepping on the belly of a woman during “deliverance”. This led the Amnesty International in Ghana to call for his prosecution for assault.

In this article:200 for using strobe lights,Court slaps Bishop Obinim,sirens on his Land Cruiser,with GHS1