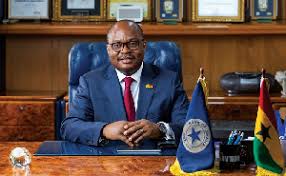 The High Court in Accra has ordered a subpoena to be served on the Governor of the Bank of Ghana, Dr Ernest Addison, to appear or instruct its official to appear before it on March 10, 2022.

The court said the Governor or his officer is to appear to produce the statement of accounts of Capital Bank from June 2015 to August 2017.

The order of the Court was made after counsel for William Ato Essien, the first accused person facing charges including stealing made a request for an official of the bank to produce the statement of accounts to enable him to mount his defence.

In court on Thursday, March 3, 2022, after Dr Isaac Nyame, Chartered accountant had testified as the first Defence Witness for Ato Essien, the court said, the said official should appear on March 10.

Lawyer Baffour Gyawu Bonsu Ashia, counsel for Ato Essien said, “when we had the case management, I indicated to the court that by way of subpoena, we pray the court to make an order directed at the governor of Bank of Ghana or any senior official of the Bank of Ghana to produce the statement of account of capital bank between June 2015 and August 2017″.

The court presided over by Justice Eric Kyei Baffour, a Justice of the Court of Appeal sitting with additional responsibility as a High Court judge acceded to the request.

“I accede to the request of learned counsel for the first accused and order the registrar of the court to seal a subpoena directed at the Governor of Bank of Ghana who shall direct the appropriate department of the bank of Ghana that is in charge of the statement of account of commercial banks to produce the bank statements of the capital bank (now in receivership) from June 2015 to August 2017,” the court directed.

The court said, “an official of the bank of Ghana is to appear in court on the 10 March 2022 at 11a.m to tender the statement of account before the court.”

Dr. Isaac Nyame, Chartered accountant, appearing as the first Defence Witness for Ato Essien told the court that, he is a Fellow of the Association of Chartered Certified accountants.

He read his Witness statement he filed on January 27, 2022 and same has been tendered

Under Cross from Prosecution led by Anastasia Karimu an Assistant he told the court that, he was engaged by solicitors to review and prepare a reconciliation report on funds flow and related balances.

He also told the court that, the documents he used to prepare the report were all given to him by the solicitors of the first accused person.

He also told the court that he did not know the specific offences the first accused person is alleged to have committed.

Dr. Nyame said, based on the information he was given he could not tell how the offences were allegedly committed.

The Witness said he did not know how much the first accused person is alleged to have stolen.

When it was put to him by the Assistant State Attorney that it is not a total of GHs130m but rather GHs192.5 that the first accused is charged to have stolen by the first accused, the witness said, “the scope of work given by lawyers of first accused required me to identify amount of GHc130M which they wanted me to confirm by the documents how the amount was utilised hence the need for a reconciliation.”

“I was not told that the first accused has stolen money. They just wanted my expect advise or expect confirmation regarding how the monies were utilised,” the witness noted.

“I do know the purpose based on the documents reviewed especially the report of the receiver that the money was held and intended for capitalisation of capital bank,” he noted.

“I am preparing your report you did not have access to all the financial records of the sovereign bank.

“Those documents were not made available to me by lawyers of the first accused. However, the Dina dial Statements themselves were made available by the solicitors of the first accused and therefore the information I required for my work was not to review the entire financial record but to review the financial statement that will enable me get comfort that the information I required was sufficient and appropriate for my work,” he told the court.

Ato Essien and two others Tetteh Nettey and Frutzgerald Odonkor have pleaded not guilty to some 23 charged and have been granted bail.