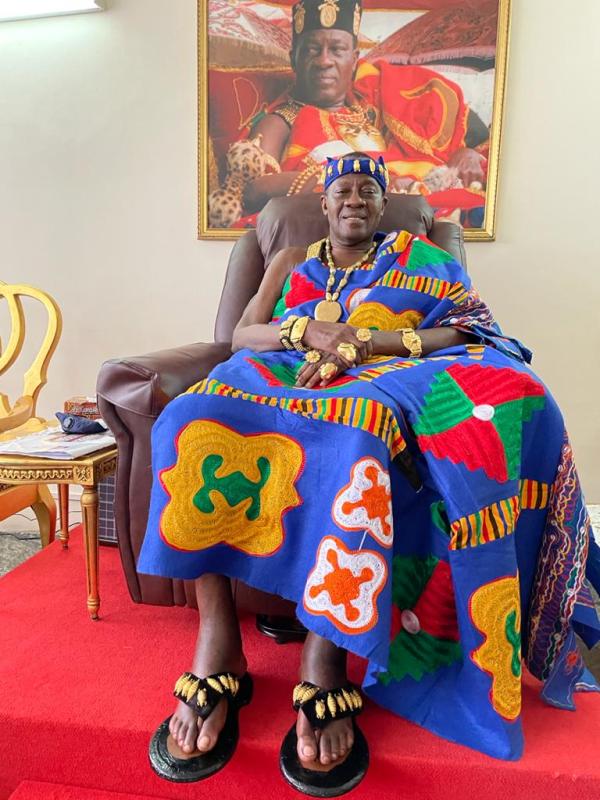 Omanhene of New Juaben Traditional Area in the Eastern Region of Ghana, former Government Statistician, Chancellor of All Nations University and first African to chair United Nations Statistical Commission Daasebre Professor (Emeritus) Oti Boateng, has joined his ancestors at the age of 83 years.

African Editors sources have confirmed that the former Government Statistician died on Monday 9th of August, 2021 after celebrating Akwasidae on Sunday at Yiaadom Hwedie Palace in Koforidua and short illness.

The late Daasebre Oti Boateng was not only a distinguished traditional ruler but also an academician and internationally recognised statistician who worked at various times with the United Nations and other international organisations.

One of the key crusades he launched in recent times was the Root-Based Model (RBM), an innovative development model to reduce poverty and inequality in Ghana and on the African continent.

He wrote a book to support his internationally acclaimed and award-winning development model.

Also, he offered key support to the Graphic-Zoomlion National Sanitation Project when it was launched in the Eastern Regional capital, Koforidua, last July.

The Omanhene was the chairman during the Sanitation Dialogue, at which he underscored the need for inclusiveness in the national bid to make the country clean.

At the event, Daasebre called for a change in attitude towards environmental sanitation by stressing the need for people to always keep their surroundings tidy.

“Also, there is the need for a continuous campaign on proper sanitation practices to drum home the consequences of filth on the health of the people. There must be a sustainable social intervention on sanitation by the government as well,” he emphasised.

There were plans to launch the celebration of his 30th anniversary on the stool next year.

He was a member of the Yiadom-Hwedie Royal Family of Juaben, Ashanti, and New Juaben. His mother was the queenmother of Juaben in Ashanti.

As a traditional ruler, Daasebre Oti Boateng strengthened the New Juaben Traditional Council as a local institution for the prosperity of the people.

He institutionalised the first traditional festival in post-independence Ghana – the Akwantukese or the Great Migration – which brings into contemporary prominence a missing but critical and major event of Asante history in Ghana.

He was also a former president of the Eastern Regional House of Chiefs.

Known in private life as Professor Emeritus Emmanuel Oti Boateng, he was acknowledged as a global authority in statistics and was the recipient of many national and international awards, including a recognition as one of the greatest minds of the 21st century by the American Biographical Institute.

In 1982, he was appointed to the high office of Government Statistician and served with distinction for a record period of nearly 18 years until 2000.

As Government Statistician, he successfully conducted the 1984 population census, amid great challenges of an entire country under military curfew.

From 2003 to 2018, Daasebre served as a United Nations Commissioner on the International Civil Service Commission, representing Africa south of the Sahara.

His three-volume series: “Development In Unity Volumes I, II, & III”, completed in January 2019, is a compendium of his research works and exploits spanning over four decades written to revolutionise development thoughts and inspire a new generational philosophy of development.

His latest book, Implementing the Root-Based Development, presents a practical implementation plan for his award-winning RBD of development and the results of the first baseline survey conducted under the model in 2020 to ensure sustainable community development.

He has over 100 technical publications to his credit in the areas of population and health, statistics, governance, disaster management, economics and policy issues.

Before his tertiary education, he attended the Konongo/Odumasi Senior High School for his secondary education.

Until his demise, he was implementing “Operation Clean Communities”, a sanitation and hygienic health intervention.

Operation Clean Communities is derived from health, which is one of the six thematic development concerns of the Root-based model. Through the built-in communication and information flow mechanism, the communities are connected together with shared ideas and expertise for rapid development. By such dynamic institutional networking, these communities are forged in strength and connected in unity to promote sustainable community and national development. Guided by the cardinal principles of diversity and inclusion, the Root-based communities continue to thrive by staying connected.

As a Root-based development initiative, Operation Clean Communities is expected to help community members maintain and improve sanitation and wellbeing, prevent the spread of infectious diseases and upgrade their preparedness for natural disasters. The community we live in is part of who we are. The decisions you and your neighbours make impact those around you since the community embraces all its residents who would not have it any other way!

Operation Clean Communities requires residents to look beyond themselves and take “collective responsibility”. It focuses on sanitation and the importance of leading a generally healthy lifestyle in order to protect the community as a whole. The collective responsibilities that individuals have for their communal health can lead to positive interactions within the community as a whole. Thus, operation clean communities is inextricably tied to individual wellness as the community constitutes the environment in which people live. It is therefore difficult to be healthy personally if your community is not clean and healthy.

The operation focuses on the preventive rather than the curative aspect of healthcare. It is inspired by the universal dictum that prevention is better than cure. It will thus involve the use of trained personnel in a comprehensive health education of households within the two Municipalities constituting the New Juaben Traditional Area.

This critical phase will be preceded and followed by pre-intervention and post-intervention surveys to establish the level of community knowledge on sanitation and disease transmission mechanisms. This will also permit the use of statistical techniques to measure the impact of the health education intervention. By this strategy, the operation is expected to break the pathway of disease transmission not only for COVID-19 but also for the four major diseases of malaria, cholera, typhoid and measles revealed as afflicting the communities in the Root-based survey conducted in 2020.

Before his death, he was the Chancellor of All Nations University in Koforidua.

Below are some exclusive pictures of the late Daasebre Prof.(Emeritus) Oti Boateng