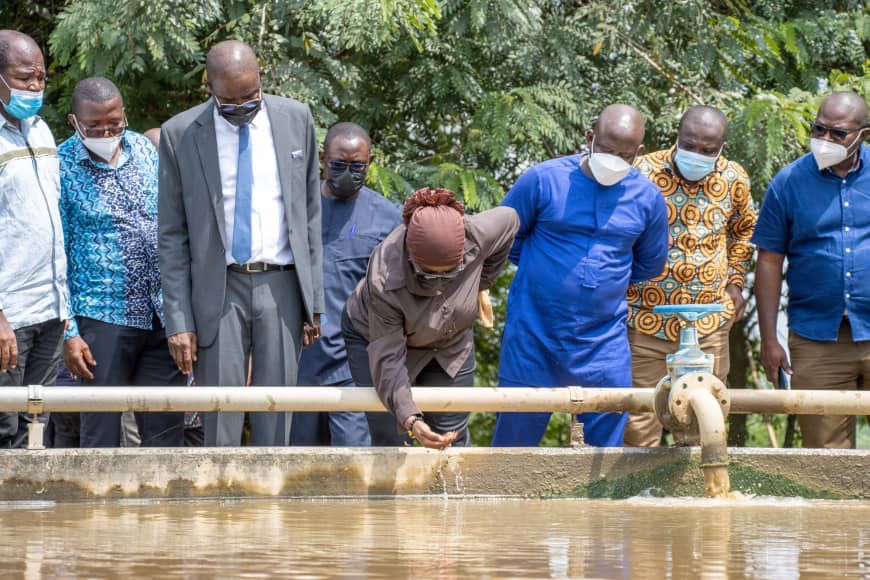 The Minister for Sanitation and Water Resources (MSWR), Cecilia Abena Dapaah on Tuesday, February 21, 2022, toured both the Weija and Nsawam treatment plants to investigate the ongoing human activities along the buffer zones as well as the sand winning activities and encroachment around the Weija Dam catchment area.

The Minister was accompanied by the Managing Director of Ghana Water Company Limited (GWCL), Ing. Dr. Clifford Braimah together with other staff and officials of both Ministry and GWCL.

During the tour at Nsawam treatment plant, the Minister was briefed on the current levels of the raw water source which indicated that due to the dry season, the Densu River had gone down below the minimum abstraction level.

The minimum abstraction level of the plant is 2.3 meters but as at February 13, 2022, the level was at 1.3 meters, as a result the plant had to be shut down for lack of water. With recent rains upstream, water levels had increased to 2.3 meters, which was enough for operational activities on the plant

Miss Dapaah commended Staff of the Nsawam Treatment Plant for their efforts in keeping the plant functioning and neat but also cautioned inhabitants to desist from clearing the river bank and farming along the buffer zones.

She again highlighted on the fact that when such activities are perpetrated, siltation occurs because loose soil is washed into the water source, thus leaving small amounts of water for treatment.

“GWCL is forced to use more chemicals in the treatment process which makes the cost of production very high and eventually impacts on our tariffs”, she noted.

The Minister explained that every water source or river must be given a 100-meter buffer on both sides which would allow for trees to be planted as a means of providing shade for the raw water source.

“Without vegetation in the buffer zones, water sources are likely to dry up due to siltation and exposure to the sun, which causes high rate of evaporation, hence the need for these demarcations”, Miss Dapaah stated.

She therefore said her Ministry would collaborate with the Forestry Commission and Ministry of Lands and Natural Resources to plant seedlings around demarcated areas owned by GWCL and buffer zones for water bodies.

“We will not wait for people to encroach before taking action. We need to be proactive”, she noted.

At the weija treatment plant, the Minister also toured the Treatment Plant to assess the impact of illegal sand wining activities and encroachment around the Weija Dam catchment area.

The Minister immediately ordered a halt of an ongoing stone mining operation within the catchment area and demanded the confiscation of the truck keys as well as offload of the already loaded trucks.

She expressed her disappointment and advised the illegal stone miners and sand winners to desist from such practice because the activities affect the operations of the treatment plant.

Miss Dapaah therefore ordered the tasked security and military forces stationed at the Headworks to stop all trucks from climbing the hill, adding that, if these trucks are stopped, such nefarious acts cannot be perpetuated.

The Minister explained that water from the Weija Treatment Plant serves as a source of water supply for over 1.5 million people in the western part of Accra, hence the need to protect its integrity.

“We are looking for funding to rehabilitate and expand the treatment plant to take care of population growth for the next 20 to 25 years. If sand winning activities continue, there will be no land left for future expansion”, Miss Dapaah stated.

She therefore cautioned illegal sand miners to desist from destroying the land and water resources.

She again noted that the tour has given the Ministry an insight of the happenings on the ground which is the first in the series of nationwide tours to ascertain the current situation of water supply in the country.

“We have seen things for ourselves and we are going back to the drawing table to come out with deterrent measures”, she said.

In this article:Dapaah seizes keys to excavator,Nsawam water plants,used for unlawful sand winning at Weija