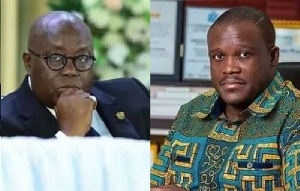 President Akufo-Addo is in crossfire with the Paramount Chief of Aflao Torgbui Fiti for demanding completion of e-block stated by Ex-President John Mahama under the 200 Community Day Senior High Schools.

President Akufo-Addo challenged the Aflao Traditional Ruler Torgbui Fiti to complete the e-block in his paramountcy if he is frustrated about how stagnant the project has become whilst questioning his capacity and eligibility to give the Education Minister ultimatum to complete the project.

The comment has received a backlash from many who concluded that the remarks are derogatory to Torgbui Fiti with Ketu South Member of Parliament Abla Dzifa Gomashie and North Tongu Lawmaker Samuel Okudzeto Ablakwa demanding immediate apology from Akufo-Addo.

Reacting to the comment Ningo Prampram Prampram MP and Presidential Staffer in John Mahama Administration Sam Nartey George who agreed the remarks are a total disrespect for the people of Aflao asked “whether President Akufo-Addo speak to Otumfuo, Okyehene like Torgbui Fiti?”.

Meanwhile, former Deputy National Organiser of NDC and MP for Buem Kofi Adams is of the view an apology from President Akufo-Addo to Torgbui Fiti will settle the matter.

But, NPP MP for Mpraeso David Opoku assumed “President Akufo-Addo might have already reached to Torgbui Fiti to settle the matter because they are friends”.