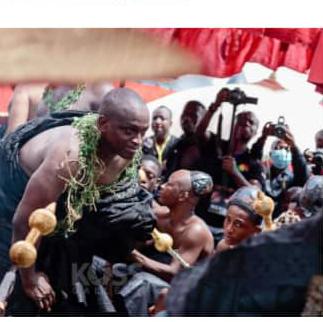 The descendants of the Nana Duwaa gate want the Registrar of the Eastern Regional House of Chiefs to be checked because he is denying them justice.

Descendants of the Nana Duwaa’s Gate of the Yiadom –Hwedie Royal Family of Old and New Juaben are lamenting over a setback of their June 6, 2022 petition and injunction at the Judicial Committee of the Eastern Regional House of chiefs over what they describe as the predisposition in the behavior of the Registrar.

According to a statement released on June 26, the petitioners note that subsequent to their petition, they filed a motion Ex parte for substituted service on June 13, 2022, which they say is suffering a setback “due to the predisposition of the House to unduly delay the process as portrayed by the Registrar with an indicting claim to the petitioners that there are no funds to organize a general meeting that will constitute the Judicial Committee to sit on the motion on the substituted service.”

To put it bluntly, the descendants of the Nana Duwaa gate want the Registrar of the Eastern Regional House of Chiefs to be checked because he is denying them justice.

Meanwhile, today at Koforidua at the forecourt of the Yiadom –Hwedie Palace, Odehyie Odehyie Kwadwo Gyamfi has been sworn in and goes by the name; Daasebre Kwaku Boateng III.

However, in an interview with Dennislaw News, spokesperson of the Nana Duwaa Royal gate Kofi Agyeman noted that the act by the New Juaben Kingmakers is against the Akan custom because It was expected that the nominee would go through forty (40) days of confinement.

The Yiadom and Hwedie Royal Families consist of the two Royal Gates to wit; the Nana Duwaa’s Gate and Nana Akua Sapomaa’s Gate.

Descendants of the Nana Duwaa’s Gate filed a petition at the Judicial Committee of the Eastern Regional House of Chiefs seeking an interlocutory injunction against the newly enstooled Omanhene of the New Juaben Traditional Council, Odehyie Kwadwo Gyamfi.

On Monday, June 6, 2022, the 51-year-old Business Executive based in Germany, Odehyie John Kwadwo Yeboah Gyamfi was introduced by the Kingmakers to the General public in Koforidua prior to his being confined after which he would choose his stool name and assume the stool as the next New Juaben Omanhene.

However, according to the petition dated at Korsah and Ackah @ Law on June 4, 2022, and sighted by Dennislaw News, the crux of the Petitioners’ case is to protest against the process by which Nana Otuo Siriboe II, Juabenhene nominated Odehyie Kwadwo Gyamfi for consideration and subsequent election, selection, and enstoolment as the Omanhene of the New Juaben Traditional area.

The petitioners, Dr. Kusi Agyemang, Ama Akyaa, Awo Asabea, Afia Achia, and Abena Amosenkye, who are descendants of the Nana Duwaa gate note that a week after the successful performance of the Doteyie of the deceased Omanhene of the Traditional area, Dasebre Oti Boateng and the queen-mother Nana Yaa Daani II, Nana Otuo Siriboe II, Omanhene of Juaben and Nana Akosua Akyamaa III, Juabenhemaa, allegedly summoned a meeting for only the Nana Akua Sapomaa’s Gate which resulted in the nomination of the Odehyie Kwadwo Gyamfi as their preferred candidate for enstoolment of the position of Omanhene of New-Juaben which they say is not in accordance with customary law and usages.

It is their case also that their royal gate, the Nana Ama Duwaa gate was neglected and not consulted before nominating the new Omanhene of New Juaben which they cite a plethora of authorities to buttress.

They further indicate that the “nomination provides the basis on which the election, selection, installation and the enstoolment processes will take place and that if the nomination process is faulty and or flawed or void, there will be no basis for election/selection and enstoolment of a chief.”

Additionally, the petitioners indicate that following the demise of the Omanhene and Ohemaa, the axe fell on the Ebusuapanin and or the Obaa panin of the Yiadom and Hwedie Royal families to nominate a candidate for presentation to Gyasehene who will, in turn, present the nominee to the Kingmakers for approval or otherwise thus they allege that Nana Otuo Siriboe II and the Juabenhemaa lack the capacity to nominate a candidate to fill the vacant position of Omanhene.

It is therefore the case of the Petitioners that the process by which the Odehie Kwadwo Gyamfi was nominated is not consistent and or in accordance with Akan Customary Law, practice and usages/ and therefore the alleged nomination is invalid.

They note also that if the Respondents are not restrained by this Honourable Committee, the continued process to enstool the Odehyie Kwadwo Gyamfi as the Omanhene of New Juaben Traditional Area has the tendency of breaching the peace and causing chaos before the determination of this petition.

They are by this praying for an order for an interlocutory injunction to restrain Nana Otuo Siriboe II, Juabenhemaa, and the Gyasehene of the New Juaben Traditional area, either by themselves, agents, assigns, proxies, hirelings, cohorts, whomsoever or otherwise howsoever from taking any further step in the selection and enstoolment of the Odehyie Kwadwo Gyamfi as the Omanhene of New Juaben pending the final determination of the instant Petition before this Honourable Committee.