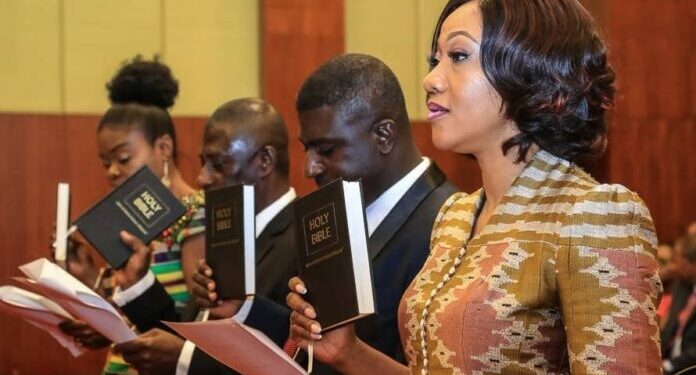 Jean Mensa and her two deputies Dr. Bossman Eric Asare and Samuel Tettey, have filed a suit against #FixTheCountry conveners at the Supreme Court.

The EC Chair and her two deputies are suing the FixTheCountry conveners, Chief Justice and Attorney-General for leaking a petition seeking their removal to the media contrary to Article 146(8) of the 1992 Constitution which stipulates that the content of a petition seeking the removal of a public office shall not be published in the media.

In a writ filed at the Supreme Court on Wednesday, 26 January 2022, the plaintiffs are seeking “a declaration that the airing of the contents of the petition by 1st defendant to the media (traditional and social) has subjected 1st, 2nd and 3rd Plaintiffs to public ridicule, hatred, opium and opprobrium and equally exposed them to unfair prejudice.”

The plaintiffs also seeking “an order of perpetual injunction directed against 2nd Defendant (Chief Justice) from determining, dealing or having anything to do in any manner whatsoever and/or howsoever, with any issues arising out of the contents of Petitioners Petition or at all.”

The FixTheCountry Movement petitioned President Nana Addo Dankwa Akufo-Addo to remove Electoral Commission (EC) Chair Jean Mensa and her two Deputies Bossman Eric Asare and Samuel Tettey from office in connection with the disenfranchisement of the people of Santrokofi, Akpafu, Lolobi and Likpe (SALL) in the December 7, 2020, elections.

In a 24-page petition, the group invoked “the constitutional process for the removal of the Chair and deputies of the Electoral Commission” with 46 signatories, including residents of SALL.

According to the petitioners, “the actions of the impugned officials, if considered in context and in light of their preceding and subsequent conduct, meets the threshold of stated misbehaviour and, or incompetence as required under Article 146 of the 1992 Constitution for the removal of these officials”.

The petitioners expressed faith “that the normal constitutional processes contemplated by the Constitution to avenge infractions against it and our democracy will be upheld without fear nor favour; and that their standing as mere citizens of this Republic does not disable them from obtaining justice, in the preserve of our Constitution.”

The group called on President Akufo-Addo to “act with necessary dispatch and have the necessary democratic integrity to not frustrate the efforts to protect our Constitution and constitutional rights”.

Due to an administrative demarcation by the EC, residents of SALL in the Guan district could not vote in the December 2020 parliamentary elections.