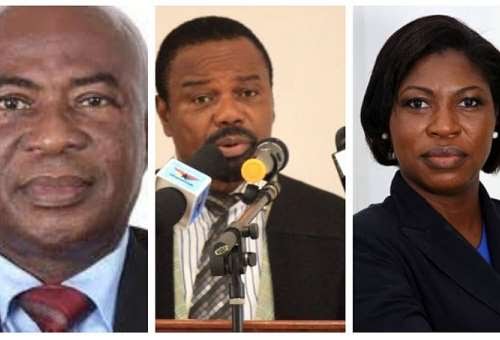 Family of Kaaka has taken a swipe at the Justice George Koomson-led Committee that probed the unfortunate happenings at Ejura after Ibrahim Mohammed also known as Kaaka’s death, accusing members of engaging in fanciful stories, reporting fake news devoid of legal awareness and integrity.

According to
Spokesperson of Kaaka’s family Abdul Nafiu Mohammed, people who threatened the family before the committee report have been emboldened by Ejura Committee report.

Addressing a press conference in Accra on Monday 4 September 2021, Spokesperson of Kaaka’s Family Abdul Nafiu Mohammed said “We’re disappointed that a committee chaired by a learned judge of Appeal Court showed no legal awareness, fairness and integrity in a national assignment to look for justice”.

In view of this, the family said that the statement made in the report that the death of Kaaka is more probably linked to a family feud is baseless and untrue. According to the family, the committee was only eager to please appointing authority at the expense of justice for Kaaka’s Family.

“We leave the committee members to the weightier justice of Allah our God”.

The Justice George Koomson-led Committee was tasked by the Interior Minister Ambrose Dery to investigate the unfortunate incidence at Ejura after the killing of Kaaka, two of unarmed civilian demonstrators during which two were also injured by the military.

According to Abdul Nafiu Mohammed, the committee had no mandate to investigate the cause of killing of Kaaka but exercised the mandate they did not have solely to please their appointing authority.

In a sharp reaction, Nafiu Mohammed said the committee’s claim that a family feud killed Kaaka is a total falsehood.

“Your pick and choose findings and recommendations of the report are falsehood, tailored to please your appointing authority”, Nafiu Mohammed noted.

For Kaaka’s Family, “40% of the committee’s findings were about the cause of Kaaka’s death. They made comment that was improper because they didn’t have that mandate”.

Mohammed Nafiu noted that “the committee was selective in the kind of evidence they wanted to rely on”.

Kaaka’s Family further expressed shock that the committee made no attempt to look into Kaaka’s social media activism despite many videos on his social media handles.

“The committee report shows careless disregard for Kaaka’s family. The fact-finding Committee made no attempt to cross check in-camera fanciful stories from Aminu Mohammed who claimed to be the friend of Kaaka intended to twist facts”, Nafiu Mohammed noted.