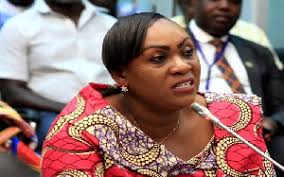 Fishermen at Elmina in the Central Region have rejected goodies from Minister of Fisheries and Acqua Culture, Hawa Koomson following closed season declared by the Ministry and stern warnings to residents to immediately stop light fishing.

Light fishing is an illegal method of fishing where fishermen mount light at sea to catch both matured and fingerlings at ease.

This unlawful fishing method coupled with the use of dynamite and poisonous chemicals for catching an important component in diets leads to depletion of the fish stock.

According to the disgruntled Elimina fishermen, it is derogatory to threaten them that she will instruct officers from the Navy to deal with residents who defy her no light fishing orders only to reconcile with Fisher folks using foods with four days to lift embargo on fishing

It has emerged that the embattled Kasoa MP upon appearing to donate some food items to the Elimina Fisher folk on Thursday 29 July 2021, was met with fierce rejection, shouting ” Y3ngyee ooooo y3ngyee” meaning ” We would not accept it”.

Meanwhile, the Kasoa Legislator has described this method of fishing as illegal and said that it has negative impact on the growth of the industry.

He noted that “the Ministry intends to prescribe standard method in fishing”.