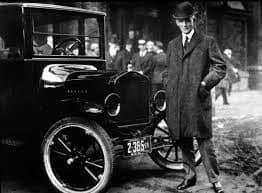 1)Henry Ford
Henry Ford was an American automobile manufacturer who created the Model T in 1908 and went on to develop the assembly line mode of production, which revolutionized the automotive industry. As a result, Ford sold millions of cars and became a world-famous business leader.

2)Charles Merril
Charles E. Merrill (1885-1956) was the founder of Merrill Lynch, Pierce, Fenner and Smith, the world’s largest brokerage firm. A brilliant market analyst and salesman, he reorganized the investment industry to attract small investors into the stock market. Merrill made his money by investing. He orchestrated the 1926 merger which created the Safeway food chain, and Merrill Lynch provided investment banking services to Safeway to finance the acquisition of other chains, growing Safeway to more than 3,500 stores across the United States by 1931.

3)Sam Walton
Sam Walton (March 29, 1918 – April 5, 1992) was an American businessman best known for founding the retail chain Walmart, which grew to be the world’s largest corporation. In 1960, Sam Walton owned nine Ben Franklin variety stores and was doing over a million dollars in business each year. But future prospects for variety stores were limited. “By then, I knew that the discount idea was the future,” he said. In 1962, he opened his first “Wal-Mart Discount City,” in Rogers, Arkansas.

4 Charles Schwab-He is the founder and chairman of the Charles Schwab Corporation. He pioneered discount sales of equity securities starting in 1975. His company became by far the largest discount securities dealer in the United States. He retired as CEO in 2008, but remains chairman and is the largest shareholder. With the May 1, 1975, deregulation of brokerage commissions, Chuck Schwab emerges as the de facto leader of a revolution. In a little more than a decade, his company defies conventional wisdom by opening nearly 100 branches, offering 24-hour quotes, and even exploring online services.

5)Walter Elias Disney
Walter Elias Disney ( December 5, 1901 – December 15, 1966) was an American entrepreneur, animator, writer, voice actor, and film producer. A pioneer of the American animation industry, he introduced several developments in the production of cartoons. He was thoughtful and creative to the people around him and that made him a natural success, inspiring young kids and even older people that wanted to think outside the box was a possibility. In conclusion, Walt Disney inspired everyone that loved his work and wanted to follow their dreams, or even wish upon a star.

Enos Denhere is a Journalist and Entrepreneur based in Zimbabwe. Denhere is looking for a job in Entrepreneurial & Leaderships Hubs, Business & Trade Expo Forums and Investments &Equity Companies. He is also interested to profile CEOs, Business Moguls, Companies and Business &Trade Forums. Denhere is ready to be your Business News Writer/ Global Business Associate Partner https://www.linkedin.com/in/enos-denhere-11293429/
Email enosdenhere@gmail.com WhatsApp +263773894975