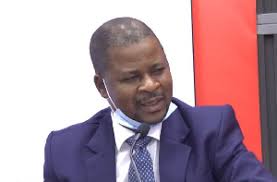 Former Deputy Attorney General and Minister of Justice Joseph Dindiok Kpemka has jumped into the defense of President Akufo-Addo, making a strong case that, unlike the Mahama-led Administration, the NPP government has set up adequate anti-graft structures to tackle corruption head-on.

Citing Office of Special Prosecutor, passage of Right of Information Law, Financial Management Act, and making corruption related offence a second degree felony, a higher crime where culprits could spend 25 years in jail which hitherto was a minor offences or misdemeanor, Lawyer Kpemka insists the president is on top of issues when it comes to the war against corruption.

His comment follows the latest survey by CDD-GHANA that shows that 62% of Ghanaians hold the view that President Akufo-Addo cannot tackle corruption.

Apart from that, the report also reveals that majority of Ghanaians doubt President Akufo-Addo’s capability and dedication to defend the rule of law, a cardinal democratic principles upon which the state rests.

Also, the findings of the survey showed that majority of Ghanaians have concluded that President Akufo-Addo cannot protect the national kitty and cannot master courage to stamp his authority nor confront impunity and indiscipline of his government’s officials when they misbehave in public service.

Below is the CDD-GHANA report:

But, the immediate past Deputy Attorney General and Minister of Justice Joseph Dindiok Kpemka says President Akufo-Addo is fighting corruption by first setting up anti-graft structures.

Speaking in an interview monitored by African Editors on Monday 31 August 2021 in Accra, the former Tempane MP said “Apart from passage of many laws, Akufo-Addo has put in place enough structures to confront corruption head-on. Nobody fights corruption with a gun, Ghana needs the structures the president continue to build whilst prosecuting suspects alleged to have committed graft”.

The former Tampane Lawmaker Joseph Kpemka is also making a strong case that there are many events unfolding in recent times that are influencing the responses CDD-GHANA is getting from Ghanaians including the demands of #FixTheCountry Movement.

Lawyer Kpemka noted that “Depending on who you’re speaking to, you’ll get a particular response. Apart from that, many happenings in recent times are feeding into the perception index from CDD-Ghana including #FixTheCountry campaigns and concerns “.