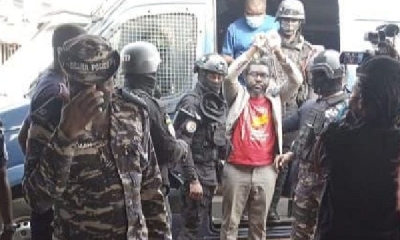 Ashaiman District has remanded #FixTheCountry Convenor Oliver Mawuse Barker-Vormawor into police custody after he was arraigned this morning.

The Cambridge Researcher Barker-Vormawor was arrested upon arrival at Kotoka International Airport from UK over a comment he allegedly made on social that he will do the coup himself if the E-levy Bill is passed by way of a legal action.

He has been charged with treason felony with the case adjourned to February 28, 2022 for him to reappear in court.

Barker-Vormawor was represented by Lawyer Akoto Ampaw who argued that the prosecutor in the matter abused his client’s human rights after he keep him in custody for more than 48-hour legal threshold.

The court remanded him into custody because the Ashaiman District court has no jurisdiction to grant bail in treason felony matters.

It is important to anchor the point that Barker- Vormawor’s lawyer is at liberty to apply for bail at the Human Rights Division of the High Court before February 28, 2022.