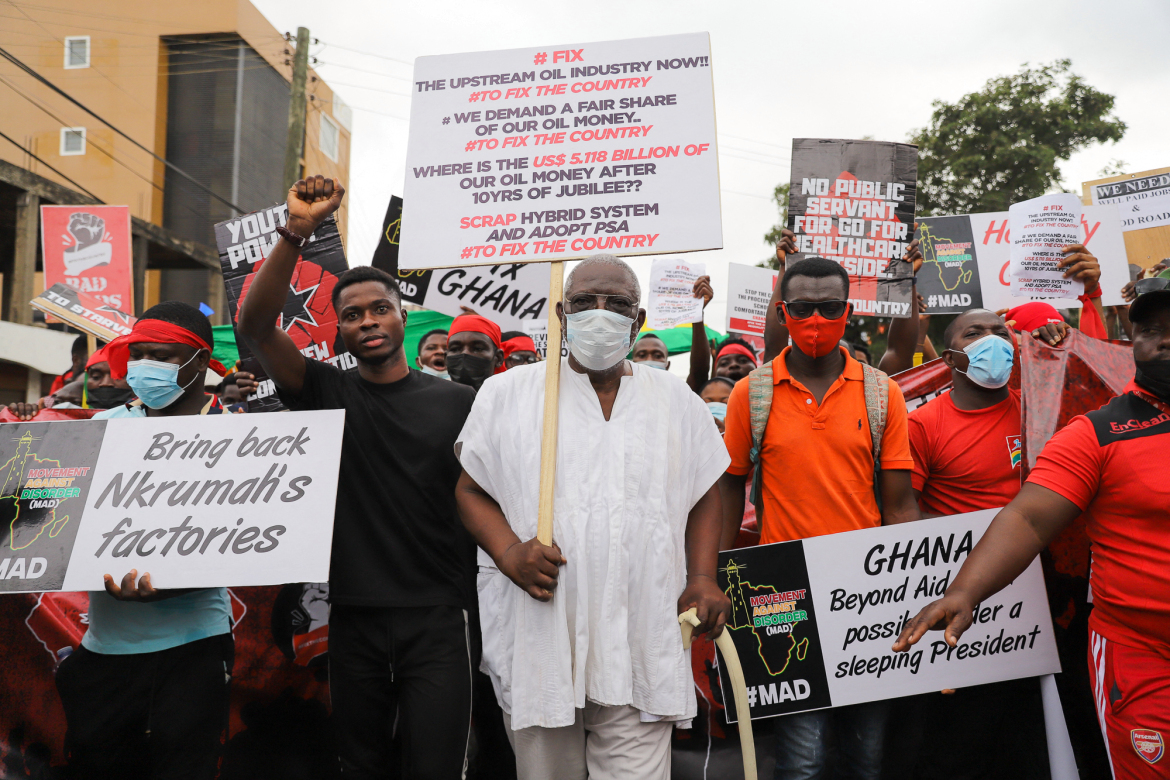 An elderly man match with protesters during #fixthecountry protest in Accra, Ghana, on August 4, 2021. The protest aims to demand accountability, good governance, and better living conditions from government. - Several thousand protesters marched in Ghana's capital Accra on Wednesday in the latest rally against President Nana Akufo-Addo's government under the slogan "#FixTheCountry". (Photo by Nipah Dennis / AFP)

Human Rights Lawyer Martin Kpebu has called President Akufo-Addo to immediately take notes of the inscriptions and messages on placards and posters displayed by #FixTheCountry Movement and the youth during their demonstration as the burning issues facing the masses to inform and shape his style of governance.

According to him, although the demonstrators did not present any petition on how they want Ghana to be fixed, the inscriptions on various placards and posters are enough to convey the overall message to government’s machinery.

Speaking in an interview monitored by African Editors on 7 August 2021 in Accra, Lawyer Kpebu said “on #FixTheCountry Protest, the president and his government should collate
messages on the placards as grievances protestors want to be fixed. Don’t be book long in governance. In law, oral evidence is admissible in line with Whistle Blowers Act…so it’s not always documents. The message from them is clear, we’ve all seen it”.

Meanwhile, President Akufo-Addo has subtly responded to #FixTheCountry protestors less than 24-hours after the movement hit the streets of Accra demanding a new constitutional order that will guarantee better living conditions of the Ghanaian populace.

The #FixTheCountry Movement which staged a historic demonstration after several roadblocks by the police amid Ex-parte orders, later quashed by the Supreme Court, hold the view that there is no much gainful sense in making one president too powerful, vested with supreme authority to make a jaw-dropping 5, 400 appointments in Ghana, refers to others as Article 71 office holders, some of whom are both Ministers and MPs, putting intense pressure on the national kitty.

The movement holds the view that if the president is not ready to repeal Article 71, amend the law to strictly separate parliament from the executive, reduce the appointments the president of the day has power to do, then #FixTheCountry Movement including the youth of Ghana must introduce signature campaigns to pile pressure on parliament to repeal some provisions in the constitution to bridge the structural inequality gaps.

The ground for #FixTheCountry Movement’s latest demands for a new constitutional is because they have observed that some provisions of the 1992 Constitution must be repealed because it was solely crafted for the most powerful class to create, loot and share Ghana’s resources at the expense of the core poor.

But, according to President Akufo-Addo, although it is a fact that Ghana is facing difficulties, his government has policies and interventions to fix the burning issues confronting the masses.

In what appears to be a direct response to #FixTheCountry historic protest in less than 24-hours in NPP at 29 anniversary meeting today Thursday 5 August 2021 in Accra, President Akufo-Addo admits “Yes there are difficulties, challenges, but these challenges can be overcome because we have the policies, we’ve programmes that will enable us to overcome them”.