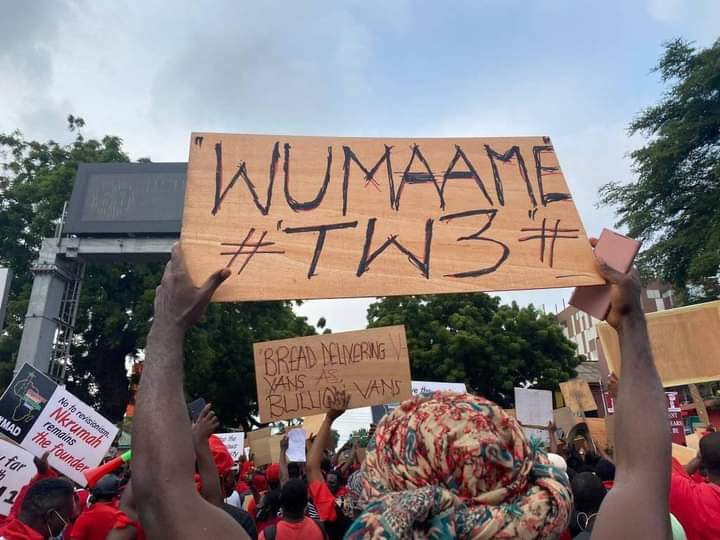 Head Pastor of Evangelical Methodist Church, Joshua Kwame Ampadu Cathedral Asylum Down in Accra Apostle Dr. Daniel Adjei says his church members are unable to pay their tithes and offerings because they are broke, accusing government’s machinery of bad governance.

According to him, the worrying lack of jobs in the country, arising from bad leadership, has caused the inability of his church members to pay tithes and offerings to the glory of God.

Speaking at #FixTheCountry protest on Wednesday 4 August 2021 in Accra,
Head Pastor of Evangelical Methodist Church, Joshua Kwame Ampadu Cathedral Asylum Down Apostle Dr. Daniel Adjei lamented that ” These days, our church members when they come to church, they can’t pay tithes, offerings because they’re broke due bad governance, bad leadership, there are no jobs. We’re against the bad governance and leadership of this nation. That’s why I attend this demonstration”.

Thousands of Ghanaians thronged to the the streets of Accra to drive their demand for fixing of problems facing Ghana as #FixTheCountry Movement staged their first protest.

The movement made several attempts to hit the streets since formation but was unsuccessful due to an Ex-parte court order but was quashed by the Supreme Court over procedural impropriety.

The last legal tussle that movement had to battle was when the police application on notice to stop the #FixTheCountry protestors from demonstrating but was shot down by the High Court in Accra.

This ruling coupled with engagement with the Acting IGP George Damper and a lot more efforts paved the way for the long awaiting protest today.

The protest which started at Obra Spot at Kwame Nkrumah Circle in Accra, through principal streets to drive home their demands.

Clad in red attires, cap, red bands, placards with inscriptions: #FixTheCountry, No jobs, Corruption, Mr. President FixTheCountry now, Ghana is not for only one family, where are the factories ?, the disgruntled  protestors were in high spirits, walking amid musical displays, demanding that President Akufo-Addo immediately fashion out urgent steps to fix the country after utopian promises in 2016 and 2020.

Below are exclusive pictures from the protest held Tuesday August 4, 2021: