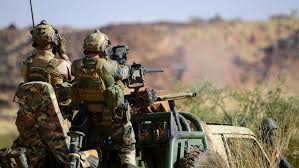 France likely to pull out of Mali but remains in Sahel

The leaders discussed their countries’ future as they fight Islamist insurgents in Western Africa.

Le Drian deemed conditions were no longer met for French forces to continue fighting in Mali but he insisted France would stand alongside other Sahelian nations.

France is present in the Sahel region with military operation Barkhane and is also part of the Takuba international task force.

Sahel and France leaders will meet on Wednesday to further discuss a new strategy. Contrary to their 2020 in-person meeting, only 3 of the 5 Sahelian presidents will be present. Nigerian, Mauritanian and Chadian leaders will attend the meeting.

Mali has been slapped with sanctions by ECOWAS including withdrawal of its Ambassadors with embargo on trade within the West African sub-region.

In this article:France likely to pull out,in Sahel,of Mali but remains