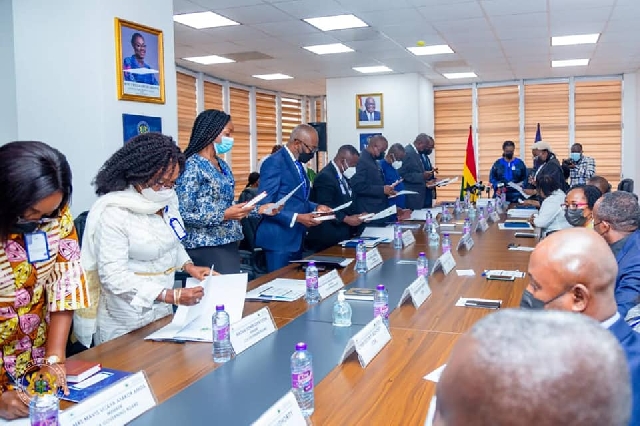 Minister of Communications and Digitisation Ursula Owusu-Ekuful has expressed confidence that Ghana is working hard to rise to number one in Cybersecurity on the African continent based on the already significant investments being made by government into the cyber space.

Ghana has been ranked as 3rdon the African Continent and 43rd globally in the latest Global Cybersecurity Index (GCI) of the International Telecommunication Union (ITU).

Communications and Digitisation Minister Ursula Owusu-Ekuful has said the country hopes to make it to number one in cybersecurity on the African Continent.

According to the Minister, this will increase investments in the cyber space.

Speaking at the inauguration of the Governing Board of the Cyber Security Authority in Accra, Ursula Owusu-Ekuful charged the members of the board to put up splendid and formidable efforts to sustain Ghana’s digitalisation agenda because cybersecurity is crucial firming up achievements in the sector.

The Minister also explained that cyber-attacks could undermine gains made in digitalisation. It could undermine our social and economic well-being and consequently, our national security.

Touting achievements recorded within other interventions including the ratification of the Budapest and Malabo Conventions, the launch of the Safer Digital Ghana Campaign, the passage of the Cybersecurity Act, 2020, the revision of the National Cybersecurity Policy and Strategy, and the development of the National Computer Emergency Response Team (CERT) ecosystem, the Minister Madam Ursula Owusu-Ekuful tasked the newly inaugurated board to focus on the implementation of the various interventions.

It is important to anchor the point that Ghana has been on the forefront of development in cybersecurity on the African Continent.