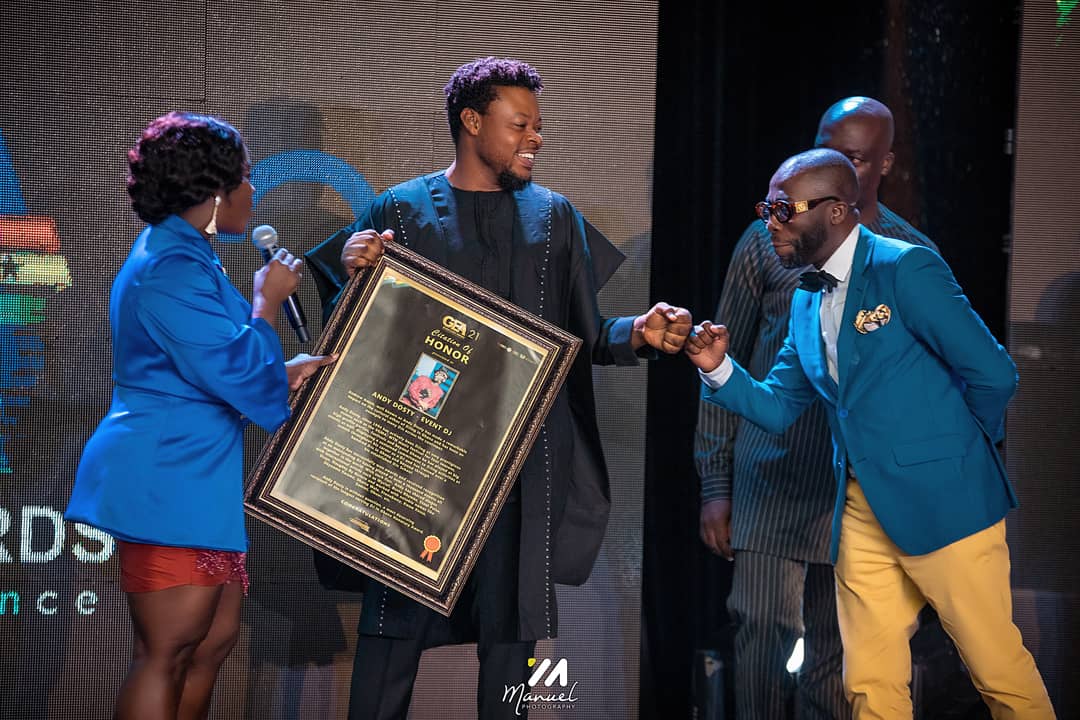 Ghana Events Awards(GEA), a creative industry player has awarded over 20 of its members in the creative art sector to boost their morale and encourage them work assiduously to make the industry a lucrative job for the upcoming artists.

The host and co-host, Jay folley and Roselyn Felli both of Joy Prime television at multimedia were very magnificent and hilarious as they are on top of the game throughout the ceremony giving the audience and invited guests the pleasure needed to enjoy the awards night at Muvinpic Hotel in Accra.

Speaking to journalists, the Chief Executive of GEA, Kelvin Kenneth was delighted and expressed his appreciation to the Board of Directors and all stakeholders who were involved in making the event possible and successful.

He explained that the nomination and selection of winners in the various categories is based on lots of considerations from the public, Board members and the economy which includes good lightening system, sound system, stage and the environment in which the event was held or occasioned.

” the public, Board members and other economic issues were considered and other issues factored in during the nomination and selection of Best possible winners in the various categories”, he said.

Mr. Kenneth added that his next option is to focus on how to improve and extend the awards ceremony to other African countries, adding that, this will even place Ghana on the limelight and also enhance the creative industry across the African continent.

He therefore called for unity among the industry players in the creative arts in order to fight a common course or agenda for the benefit of the upcoming artists.

The founder of Jandel Limited who own the overall Best award in the creative industry, Afia Moro advised her colleagues to have a passionate feeling for the creative art rather than seeking for money, stating that, your passion for the job will let you earn good money at the end.

She tasked all stakeholders in the creative art industry to be innovative and creative through learning in order to enable them reinvent new things and bring new ideas to the table which can be a tool to remain in business even in this era of the pandemic.

“try to be driven by passion whiles you try to earn good money and also educate yourselve and be in track by using the advance technologies like the internet and social media that will make us in the creative industry be at par with our competitors in the outside world”, she added.

She further outlined some challenges like failure to recognize the industry by government, division among members, failure to be paid the right amount among others that are facing the industry and wished they can be addressed as soon as possible to drive them forward.

” we lack so many things and when it comes to certain things, government fail to recognize us like the sharing of the stimulus packages during the COVID-19 era, most of our members who also placed in their request were sidelined and never get anything”, she said.

But she was grateful and optimistic that the challenges will be addressed due to government’s establishment of the creative art alongside the tourism sector, adding, we can voice out our grievances at that department to be addressed by the appropriate authorities.

Also, the Best Master of Ceremony (MC) winner from multimedia, Andy Dosty appealed to government to include the industry in the distribution of the stimulus package or offer some of the members some loans that will cushion them since the pandemic have already caused a huge damage to the industry and things are difficult for most of the members in the industry in Ghana.

He also praised the award planners and stakeholders for making the event successful because according to him, there has been an improvement in this year’s ceremony and very optimistic the previous award ceremonies will be greater.

” am considering and wished stakeholders will come together and put their resources together to ensure a massive awards ceremony in the next occasion “, he noted.

The winners of the various categories are as follows:

EVENT INFLUENCER OF THE YEAR (BLOGGER) – RONNIE IS EVERYWHERE

MOST PRESTIGIOUS EVENT OF THE YEAR- RHYTHMS ON DA RUNWAY

MOST INFLUENTIAL EVENT OF THE YEAR- GHANA OUTSTANDING WOMEN AWARDS

EVENT SPONSOR OF THE YEAR-
Adonko next level energy drink.