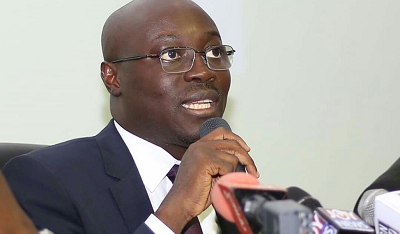 The NDC Caucus in Parliament has noted with dismay, a Bank of Ghana (BoG) Press Release dated July 26, 2022 which sought to respond to my statement calling out the BoG for engaging in illegal money printing.

It must be emphasised right from the outset, and for the avoidance of any doubt, that the NDC Caucus in Parliament stands firmly by its original assertions.

It is regrettable to observe that the BoG in it’s response, merely resorts to sophistry and less than candid ex post facto rationalisation.

Instructively, information contained at page 97, under Appendix 2A totally and unambiguously discredits the claims of the BoG.

Reference is made to the BoG claim as captured in their July 26, 2022 press release that GHS6.2billion out of the GH22billion reflects on-lending of IMF SDR resources. In stark contrast, the Minister for Finance’s Mid Year Review reports at the page in issue that there was no such on-lending. Indeed, there was zero on-lending contrary to the projected GHS4.53billion.

The other dishonest claim by the BoG relates to the assertion that some GHS2.8billion out of the infamous GHS22billion was a draw down from government’s own deposit for GETFund, DACF and NHIF. This cannot be factual considering that Appendix 2C at page 99 of the Finance Minister’s Mid Year Review reports that all those statutory payments had long been released by the Ministry of Finance and spent by GETFund, DACF and NHIF.
How can the BoG claim to be lending money that has already been spent to government? The BoG must desist from its voodoo cover up and credit Ghanaians with some intelligence.

We expect the BoG to do the honourable thing by admiting to their transgressions and asserting their independence as they are guaranteed under Ghanaian law.

Let’s be clear, this is high powered money being injected through illegal printing into the economy, hence the 33.8% growth in BoG’s balance sheet as at June 2022 and this should be extremely troubling to all well-meaning Ghanaians.

The BoG may be minded to respond to the following critical questions:

1. If a bank is holding Government stocks or bonds and wishes to discount them, the Ghana Fixed Income Market is where such banks can engage in secondary trading for liquidity purposes. Why has it become BoG’s primary duty?

2. Why has BoG over the last many months curtailed lending to banks but is busy lending to Government at the same time?

3. How is BoG implementing monetary policy currently, given the truncation in its monetary operations?

4. What are the measures being implemented to fight inflation and anchor inflation expectations currently, particularly when the policy rate has been muted and also, given the fact that BoG’s gold purchase programme is itself inflationary?

5. Why is BoG ignoring the adverse impact of fiscal dominance on the effectiveness of its monetary policy?

6. Is BoG taking cognizance of the adverse impact of monetary financing and illegal printing of money in the midst of a major economic crisis where inflation approaches an unprecedented 30% and is expected to rise further?

Our constitutional mandate is to hold the government in check and we expect BoG to do same and ensure that its support to government is not unlawful and excessive. This is a sacred mandate to the Ghanaian people.