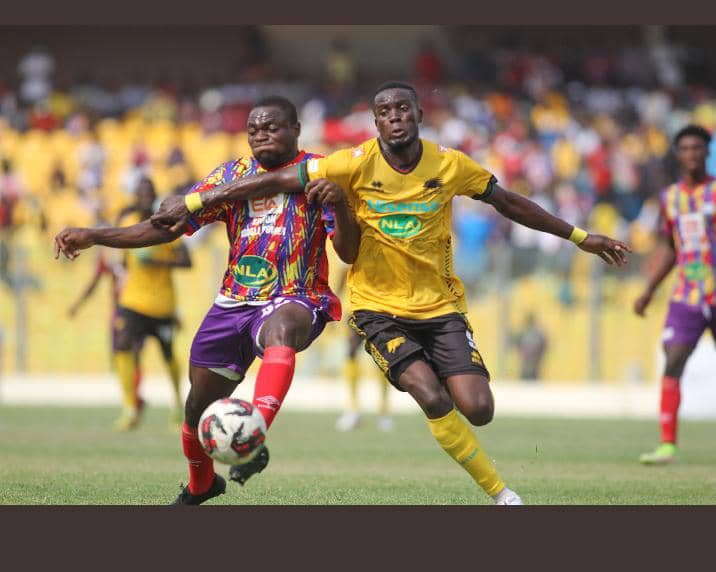 Accra Hearts of Oak and Kumasi Asante Kotoko played out entertaining goalles draw at the Accra stadium in an outstanding league on Sunday, 20th February 2022

Hearts had ex-Black Star player Sulley Ali Muntari on their side and started the game on a good note.

Muntari almost scored what could have been the beautiful goal of the season with a bicycle kick, but it did not see light of the day.

Hearts created few more chances in the first half but couldn’t make good use of them.

Kotoko came into the second half looking more determined to carry the day. They nearly got the opener after Richard Atta failed to deal with shot, but made a goal-line clearance to deny the porcupines.

Coachh Samuel Boadu made some changes and that brought Hearts into the game after the 70th minute.

They put some pressure on Kotoko and getting two quick corner kicks but was wasteful.

The remaining minutes was more of midfield action, as both sides couldn’t create clear-cut chances that will lead to a goal.

It all ended goalless, but Kotoko will be the happiest between the two, because they have maintained the 12points lead against Hearts.

Hearts and Kotoko match most often do not live up to the hype, it’s more of physical and not much entertainment.

But it was different in the match, both teams possess the ball beautifully and less physical.

This super clash will go down in history as one of the best football between the two, despite not seeing goals.