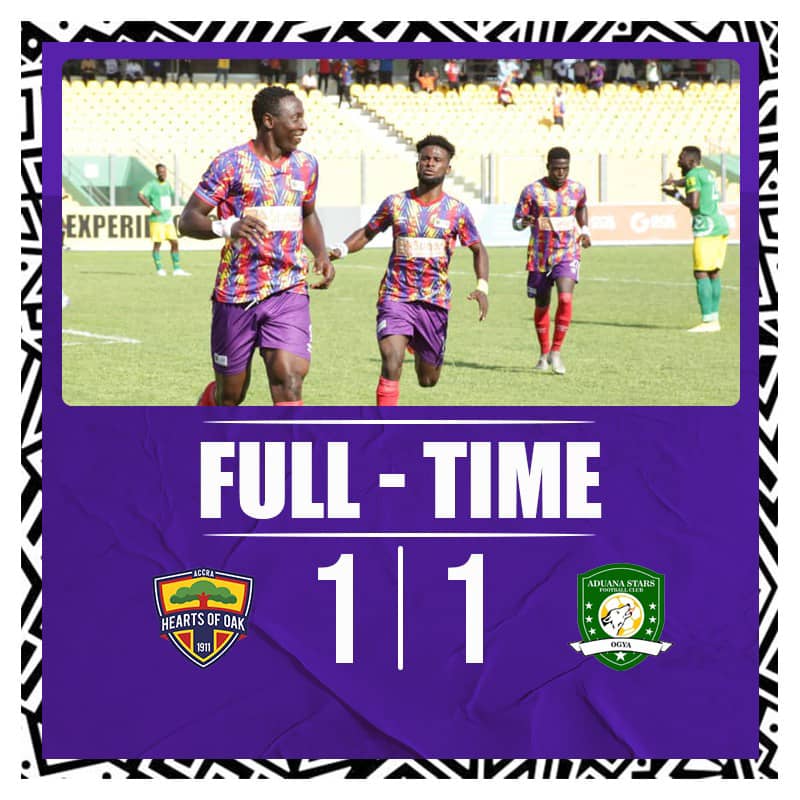 Ghana Premier League Champions Accra Hearts of Oak, once again played out one all drawn game at Accra Stadium with Aduana Stars and still without a win after three matches. Kotoko maintained their perfect start by thumping stubborn Gold Stars by a lone goal.

It all started on Friday as Kumasi Asante Kotoko traveled to Bibiani to face off with the newly-promoted side, Gold Stars. Gold Stars kicked start the match with a lot of energy, creating descent chances but wasted them upfront. The first half ended without a goal. Kotoko started the second half with determination, and it paid off in the 55th minute after Isaac Oppon curled the ball at the edge of the penalty box into the back of the net to put Kotoko ahead. Gold Stars never relent, they kept pushing and creating so many goalscoring opportunities but squandered all. In the 95th minute, many thought they have gotten the equalizer after their number 10 had one on one with Razak Abaloah, only to kick the ball into the arms of the goalkeeper.

On Saturday, there was a local debut in Accra, as the Royals Legon Cities welcome the Dade Boys, Great Olympics. It was in the 30th minute into the game that inform Maxwell Nii Abbey Quaye broke the deadlock of the game. The Royals effort to equalize never saw daylight as Olympics maintains their unbeaten run in three matches.

Dreams FC were also in action on Saturday, as they locked horns with new boys Accra Lions. It was one way traffic as Huzaf Ali gave dreams the lead in the 13th minute into the game. Agyeman Boateng doubled the lead just 6 minutes later. Salifu Rauf pulled one back in the 24minutes for the visitors Accra Lions, but that wasn’t enough.
In the 74th minute, Agyeman Boateng Mensah cemented the victory as he got his second goal and third for his club Dreams to extend their lead. It all ended 3-1 in favour of the home side.

The rest of the matches were played on Sunday, with Hearts of Oak still in search of their first win of the season. They locked horns with another struggling side Aduana Stars. Kofi Kordzi put the Phobians ahead in the 9th minute into the game. In the 79th minute into the game, Mohammed Alhassan brought down Aduana player in the penalty box which led to a red card and a penalty. Bright Adjei stepped up and placed the ball beautifully at the back to put Aduana on level. Hearts played that rest of the minutes with 10men.

Bechem United after a painful defeat to Kotoko bounced back to defeat Elmina Sharks by 2goals to nil at Bechem. Obuoba Yaw Dasi and Francis Twene were e the goal scorers.

Karela United came from a goal down to beat Berekum Chelsea by 2goals to 1. Bright Amponsah broke the deadlock in the 7th minute for the visitors, but Umar Bashiru concealed it in the 30th minute. Darlington Gyan Fosu scored in the 50th minute to put the host ahead and that is how it ended.

The pride of the North, Real Tamale United( RTU) got their first win after a draw and a loss in the first two matches. They defeated WAFA by 2goals to nil. Inform David Abgna opened the score in the 10th minute and sealed the victory in the 75th minute with the second goal. David has now scored in all three matches.

Struggling Medeama SC once again failed to pick up the three maximum points after playing a goalless drawn game with Eleven Wonders at Techiman.