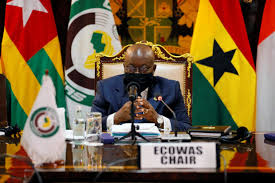 West African Network for Peacebuilding (WANEP) says ECOWAS needs to re-look at its responses to early warnings of military coup within member states.

This follows military take over of  Government of Guinea led by Mamady Doumbouya.

It must be noted that the coup leader Doumbouya was promoted from lower to a higher rank within a short period by Guinean President Alpha Conde but could not secure the loyalty from him.

Statement from Coup leader Doumbouya revealed that the military takeover was as a result of worsening conditions of the people of Guinea where Prof. Alpha Conde and his presidential staffers continue to spend at the expense of the masses.

Reacting to the development in Guinea, Head of Research and Capacity Building at WANEP Dr. Festus Kofi Aubyn said “ECOWAS needs to re-look at responses to early warnings in member countries. West Africa is the most violatile in the sub region and ECOWAS must review early signals of military takeovers”.

Meanwhile, Director of Faculty of Academic Affairs and Research at Kofi Annan International Peace Training Centre (KAIPTC) Prof. Kwesi Anning is of the view that ECOWAS together with African Union (AU) has failed to get its member states to implement instruments they have appended signatures to and continue to drag their feet.

Prof Anning noted that “ECOWAS’ heads sitting unconcerned, folding their hands and watching Guinea President to change the already 10-year constitutional tenure of the presidency through referendum because of his desire to stay in office, simply undermines ECOWAS’ tools, instruments and resolution mechanisms. It has happened in Mali and now Guinea. What are the tools being used by ECOWAS?”.