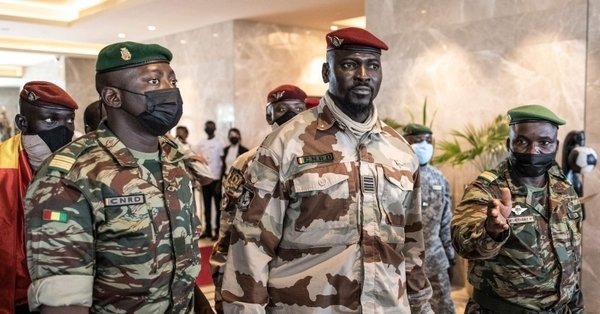 Guinea Coup Head to be sworn-in as interim prez today

Mamadi Doumbouya is to serve as an interim president and supervise a transitional arrangement until Francophone West African nation returns to a constitutional regime.

According to the Supreme Court of Guinea, Lt. Col. Doumbouya is expected to be sworn-in the midday within conference hall of Mohammed V Palace inside Conakry, the capital of Guinea.

Attendence to the inaugural swearing-in will be strictly by invitation.

The totality of the swearing-in is to permit Lt. Col. Doumbouya govern the affairs of Guinea until the country wraps up transition from dictatorial regime to constitutional rule ensuring that Guinea’s democratic experiment is not thrown out of gears.

Spelling out a cocktail of assignments comprising drafting of new a constitution before conducting general elections expected to be a political decision although the timelines for the overall task of transition were not specified.

The transitional timeline will be decided by a collective agreement by the forces of Guinea together with CNRD.

The interim president Col. Doumbaya will be the Head of the transition, chair of the National Rallying Committee for Development (CNRD) established by head of state and Commander-in-Chief of the Guinea Armed Forces.

The National Transition Council, CNT, consists of 81 members selected from political parties, civil society, trade unions, employers, security forces and many other organisations will be tasked to draft the new constitution of Guinea.

83-year-old Prof. Alpha Conde rose to become Guinea’s first democratically-elected president in 2010 and was re-elected in 2015, ten year constitutional threshold that would have ended his administration.

His inordinate desire to hold onto power at all cost led to many strange decisions last year changing the Guinea’s supreme law via a referendum that permitted him to contest for a controversial third term in October 2020, secured ‘power grab’, described as questionable by the opposition in the Francophone West African State.

The 2020 election was characterised by protest leading to the murder of many Guineans.

Meanwhile, ousted President Alpha Conde has refused to sign resignation letter presented to him by Guinea’s strongest man Lt. Col. Mamady Doumbouya and has been detained since September 5, 2021.