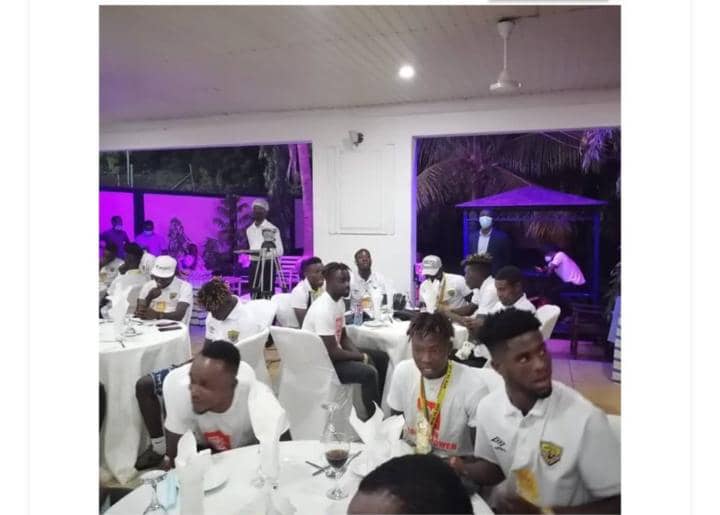 Board Chairman and Majority Shareholder of Accra Hearts of Oak, Togbe Afede has revealed that his outfit will in this week credit the accounts of Hearts of Oak Team players as part of their rewards for winning the Ghana Premier League and the FA Cup.

The Phobians put up a strong fight and a splendid performance to win the double trophies making fans and the book runners of Ghana’s oldest club proud in the season with the excitement on higher notes.

Togbe Afede disclosed this when he invited the team to his residence on Monday evening for a dinner party lead than 48 hours after ‘Never say die until the bones are rotten club’ captured the FA Cup on penalties but in a grand style.

The programme started with the team’s Captain Fatau Mahammed, introducing the entire players to the Board after which the Communication Officer, Opare Addo introduced the coaches, Board Members and various groups within the club.

Togbe Afede who in his open remarks thanked the Technical Team and the players for accomplishing the most difficult task for the season, hitting the target set up by management of the club this year, that is winning the league and the FA Cup.

Togbe Agree noted that the board set four targets for this year. Building a training complex, building modern secretariat, building Hearts commercial center and winning the league. He said among the four, winning the league was the most difficult task, but they have delivered.

He went on to remind the players of how they were rewarded after beating Kotoko and Legon Cities without making noise about it. In similar fashion, they will be rewarded for winning the league and the FA Cup. He assured them, that by the end of this week they will smile to the bank for their rewards.

“You remember when we beat Legon Cities and Mr Odotei came to reward you and nobody heard about it…and against Kotoko, he did same. You are going to be rewarded for your hard work but in a similar fashion”, he said.

“Within this week, all your rewards will be credited to your account”, Togbe told the team.

In this article:- Togbe Afede,Hearts players & backroom staff,to be rewarded this week