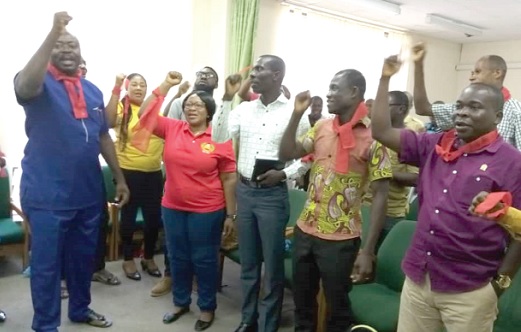 Health Service Workers Union (HSWU) is expected to fully resume work today after they suspended strike and direct members to return to post.

According to the union, the latest decision by leadership to suspend the strike follows the return to negotiation table with government to address their grievances.

Speaking at the media General Secretary of Health Service Workers Union Franklin Owusu Ansah said although the union has suspended the strike, they will laid down their tools if government fails to comply with what they agreed on.

Striking Health Service Workers Union wouldn’t cancel their continuous nationwide industrial action notwithstanding a directive from the National Labour Commission (NLC) to them to return to work.

Greater Regional Chairman of the Health Services Workers’ Union, Nene Teye Abloe, told African Editors that the union anticipated proper correspondence from the NLC prior to thinking about a call off of the strike that began on October 26, 2021.

“It should been an official letter written to us by government. They can’t simply go on air to begin talking. We won’t acknowledge that,” he said.

The union including research facility professionals, records faculty, orderlies among others, have throughout the previous four days laid down their tools in demand for better working conditions as against worsening working conditions of service.

Health Services Workers’ Union had expressed disappointment that government was purposely oppressing its individuals by disregarding its interests while acting in better confidence towards different associations.

The union said it had trusted that dealings that have traversed two years would have closed when the Fair Wages and Salaries Commission met a gathering from the eighth to the ninth of October 2021.

The circumstance has negatively affected health administration across Ghana with patients left stranded.

Mr. Abloe likewise said the government was utilizing the NLC to get everything its might want in the stalemate.

“It is a similar manager who is utilizing the office to threaten [us], and we won’t permit that to occur.”

“Government needs to return to negotiation table. For what we are searching for, they ought to have the option to fulfill our needs and afterwards, there will be harmony and agreement on the work front,” Mr. Abloe demanded.