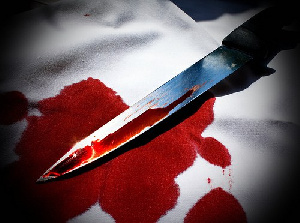 Husband killed his pregnant wife at Nyankyerenease in A/R

A 30-year-old pregnant lady, Betty Owusu has supposedly been killed by her husband Maxwell Boadu at Nyankyerenease in the Kwadaso Municipality of the Ashanti Region.

The occurrence took place today, Saturday, October 16, 2021, during a little disagreement betweent them

The suspect, 40, as of now on the run supposedly butchered and cut his three-month-old pregnant spouse a few times in the chest, back and bosom within the sight of their 6-year-old kid.

The landlady and onlooker, Madam Ama Nyarko says she heard the now dead shouting for help that somebody was killing her at 12 midnight while alert for petitions.

Maame Nyarko said she met the spouse of the deceased emerging from their room with blood stains in his grasp. He cleaned his hands and disappeared from the house.

She said she went into their room and saw the victim in a pool of blood with numerous blade wounds on the body.

She was hurried to the Komfo Anokye Teaching Hospital for clinical treatment yet passed on upon appearance. The corpse has since been deposited at the morgue for examination and autopsy.