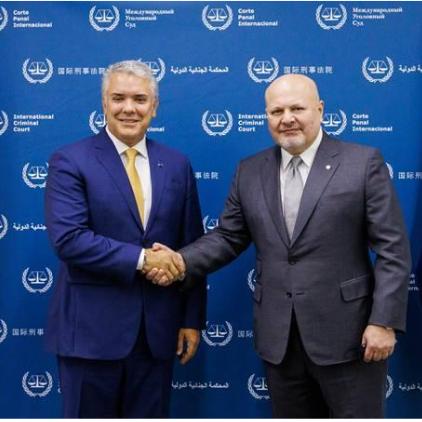 Today, I was delighted to receive H.E. Mr Iván Duque, President of Colombia and his delegation at the Seat of the International Criminal Court (“ICC” or the “Court”), in The Hague, The Netherlands.

This visit follows our productive discussions held in Bogota in October 2021, providing a valuable opportunity to further discuss and make progress, particularly with respect to the implementation of the ground breaking Cooperation Agreement I signed with the President during that visit, and to explore avenues for my Office to continue supporting national accountability efforts within the framework of this Agreement.

The establishment of the Cooperation Agreement represented a collective commitment to strengthen and accelerate accountability efforts in Colombia. During our meeting, President Duque reaffirmed his commitment and that of his Government to implement every provision of the Cooperation Agreement. I also informed him that my Office remains firmly committed to supporting this work, including through continued dialogue with the national authorities and other key stakeholders.

I was also pleased to accept the gracious invitation extended to me by President Duque to return to Bogota in July of this year to continue my discussions with relevant authorities to exchange on concrete steps adopted to advance genuine domestic proceedings. I equally welcomed his proposal to hold a high-level regional summit focused on complementarity and judicial cooperation during my visit. I very much look forward to my participation in that timely event and to the anticipated rich discussions on these critically important issues.

I take this opportunity to convey my sincere appreciation to President Duque for his assurances that accountability remains a priority for Colombia and to renew my support to the valuable work of the Special Jurisdiction for Peace (“SJP”), the Attorney’s General Office, and that of the other national institutions in their endeavour to end impunity for Rome Statute crimes in Colombia. It is of paramount importance that progress is sustained and that the Government of Colombia continues to give the space to the competent state entities and transitional justice mechanisms to carry out with the work that remains to be done.

The path ahead requires a great deal of stamina on the part of the national authorities, and, in particular, of its judicial institutions. My Office will continue to be a partner of Colombia in its quest for accountability until it is finally and fully achieved.

ICC Prosecutor, Mr Karim A. A. Khan QC has concluded the preliminary examination of the situation in Colombia with a Cooperation Agreement with the Government charting the next stage in support of domestic efforts to advance transitional justice.