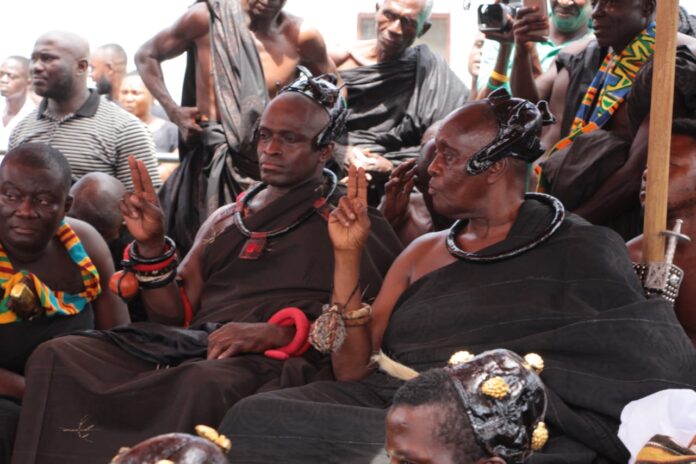 The newly enstooled Omanhene of New Juaben was sworn-in with the stool nameNana Kwaku Boateng III to succeed the late Daasebre Prof. (Emeritus) Oti Boateng who joined his ancestors in 2021 and was laid to rest in May this year together with his late Paramount Queen-mother Nana Yaa Daani II.

Nana Kwaku Boateng III was sworn-in after three weeks of traditional confinement to learn the Asante customs and traditions.

He becomes the 10th paramount chief to ascend the Yiadom Hwedie Stool.

He charged him to bring development to New Juaben and wage war against poverty and unemployment to improve the living conditions of his subjects.

“Sincerity is paramount in all things. Kingship is a voluntary service. You should be sincere and loyal to the traditional area to avoid betrayal. It is a chief who makes a stool revered and huge and vis-versa. So your conduct and character on the stool will determine the size of the stool to the outside world.

“Courtesy begets courtesy. Use the stool to bring development. Now there is no war for you to wage. The war that faces you are the war of unemployment, poverty and hardship, and the outbreak of diseases. All these are challenges that you must confront to help your subjects have peace and improved living condition with job opportunities. A hungry man is an angry person” Daasebre Otuo Siriboe II counselled the new Omanahene.

The new Omanhene for New Juaben, Nana Kwaku Boateng III assured that he will spearhead development in unity and serve humanity with humility.

“I will not disappoint you for the honour done me. I will leverage this honour to facelift Juabenman for accelerated development. I promise you that I will spearhead development in unity in New Juaben. I will serve the people of New Juaben with dignity and humility” said Nana Kwaku Boateng III.

The New Omanhene was carried in a palanquin through the principal streets of New Juaben to unveil him to the subjects.

Profile of the new Omanhene

He is the eighth born of the mother’s eleven children.

He had his primary school education at Madonna International School in Koforidua where he sat for and passed the common entrance examination in 1984.

In that same year, he enrolled at St. Peters Secondary school in Nkwantia for his secondary education. In 1989, he sat for and passed the Ordinary Level Exams with distinction.

He subsequently gained admission to the New Juaben Secondary School, Koforidua for his Sixth Form course between 1989 to 1991. He successfully passed the Advanced Level Examination in 1991.

Immediately after completing his “A” Level Course, Odehyie Gyamfi travelled to Germany and he obtained admission to the prestigious Block House College in Humburg, Germany to pursue a course in Hotel Management in 1992.

He excelled in the courses such that immediately upon completion he was offered employment as the Food and Beverage Manager at the prestigious Elyse Hotel (Block House) Hamburg, Germany.

He occupied this position until 2011 and during that period he was also assigned to Block House Restaurant in Berlin also as a Food and Beverage Manager.

His duty included, but were not limited to, creating and designing food and drinks menus, maintaining food and drink inventory, planning to forecast and executing food and beverage orders, processing, custom complaints, planning alternative recipes for customers with special dietary needs and adhering to food, health and safety standards.

After working for close to sixteen years, Odehyie Gyamfi decided to pursue more academic excellence and this led him to pursue professional certification in Logistics and Building Services.

On completion in 2014, he set up his own company, John Gyamfi Entumpelung Gartenarbeit – Gebaudeservice which is headquartered in Germany and with a branch in Accra – Ghana.

As the Chief Executive Officer of the company, he has oversight supervision of over 30 workers and 5 trainees.

In 2019, Odehyie Kwadwo Yeboah Gyamfi decided to broaden his scope of business and ventured into farming and together with a group of friends established a poultry farm in Ghana known as P89 in Winneba which has grown to become one of the largest poultry farms in Ghana.