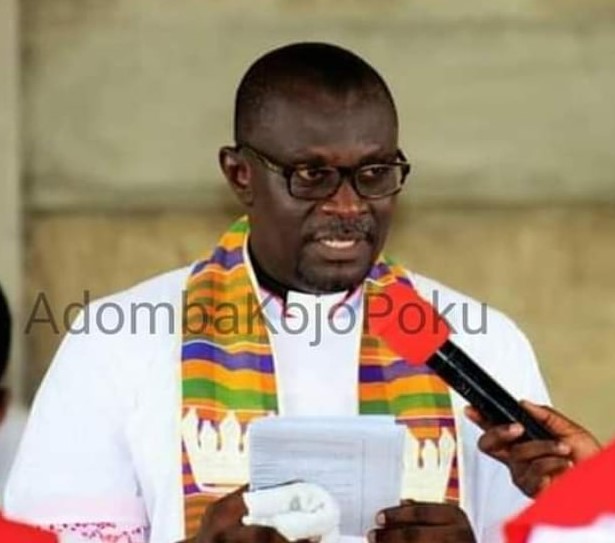 The Anglican Priest who was asked to step aside for kissing three final year students of St. Monica’s College of Education Rev. Father Balthazar Obeng Larbi has eaten the humble pie after public backlash.

A statement signed and issued by Rev. Father Obeng B. Larbi said “I’m sincerely sorry for my action seen in the video. An attempt to add human touch to extraordinary performance of the three female students resulted in the scene in the video”.

Rev. Father B. Obeng Larbi was seen in a viral video kissing three female students of St. Monica’s College at Asante Mampong was directed to immediately step down as the Chaplain and Lawyer for the school pending investigations into his sexy conducts.

Rev. Father Obeng Larbi who served as the Chaplain and Lawyer for the college for 5 years was seen kissing at a service to usher-in SRC Executive of the college with the rests at the School’s Assembly Hall cheering him on with joy.

Anglican Church of Ghana says it has commenced investigations into the conducts of the Rev. Father Obeng Larbi and will apply the necessary sanctions.

But, even before the committee tasked to probe the incidence by the Anglican Church begins its work, Rev. Father Larbi has been shown the exit pending the determination of the matter.

Confirming the decision on the matter , Venerable Okyere Korankye of St. Monica’s College of Education, Mampong said “Our members both in abroad and Ghana have watched the video on social media and are not happy. The Bishop has directed that Rev. Father Obeng Larbi is relieved off his posts as Chaplain, Lawyer and clerical duties”.