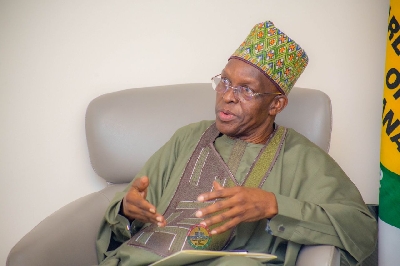 I’m Speaker because I’ve ‘very good friends’ in NPP but I can’t say I ‘see, hear, speak no evil’ – Bagbin

Ghana’s Speaker of Parliament Rt. Hon. Alban Kingsford Sumana Bagbin is insisting he won the Speaker slot because even though he is a member of the opposition National Democratic Congress (NDC), he has “very good friends” in the governing New Patriotic Party.

Speaking at a meeting with the Council of State, the former Nadowli Kaleo MP said it was important that parliament is seen as the essence of Ghana’s democracy.

“Why do I say so? The practice of what we call ‘culture of democracy’ should be seen and felt on the floor of parliament and that is why, sometimes, we say it’s the bastion of democracy”, he explained.

“If there’s a coup, it’s parliament that suffers”, he noted.

“The judiciary will always be there, there will always be an executive arm and because of the absence of parliament, too many Ghanaians don’t understand what parliament is and what the work of an MP is”, he observed.

Using himself as an example, Mr Bagbin said: “I’ve gone through it from 1993 up to date. I’ve seen some of the challenges. I identified some but when I really took over, then the weight came on me”.

“I couldn’t have won without the support of members from the other side and, so, you’d hear me saying that at the end of the day, I don’t expect either party to praise me”.

“You also heard me say that in the performance of my functions, I will be impartial but that doesn’t mean I will be neutral and this is what I learnt from my father, the late Rt Hon Peter Ala Adjetey”, he said.

“It’s a ruling which is in the Hansard. So, [with] any matter that comes before the house, I cannot be neutral because I have interest in it but in performing my duty as Speaker, I have to be impartial. Those are the differences. People don’t understand …”, Mr Bagbin clarified.

“I cannot sit as a Speaker and see no evil, hear no evil and speak no evil”, he declared.

“That will be abdicating my role as a statesman, as one of the leaders of the country”, he noted.

“So, I have an interest in whatever comes to the floor and whether it is against the left or against the right, I will say it. That is what I’m committed to. That’s why I said that at the end of the day, I don’t expect either party to praise me because I may hurt both”.

In this article:Bagbin,hear,I’m Speaker because,I’ve ‘very good friends’ in NPP but I can’t say I ‘see,speak no evil’ –