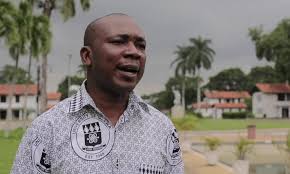 Speaking in an interview monitored by African Editors, as the country’s debt stock hits high distress levels, Prof. Bokpin reiterated that the current debt situation could get worse by the end of September, if proper interventions are not implemented.

“When you see the proportion of the debt payment, relative to the size of the revenue envelope and you look at your rising debt and you look at the rate of economic growth and the drivers of that growth, you can reasonably predict that it’s just a matter of time that the economy will just collapse. We’re probably going to run into a little bit more difficulties towards the end of September,” he said.

Last week, independent ratings agency, Fitch, downgraded Ghana’s creditworthiness from a B to a B minus, with a projected 83% debt-to-GDP for the year ending December, 2021.

This will significantly affect the country’s access to loans on the international market even as the government’s local revenue mobilization campaign is threatened, as the controversial e-levy is yet to be approved by Parliament.

Ghana’s current public debt stock stands at a staggering 341.8 billion Ghana cedis with a corresponding debt to GDP ratio of more than 77% as of September ending 2021.

This means if the country should share this amount across the country’s 30.8 million population, everyone will owe approximately 11,000 Ghana cedis.

In the first quarter of 2022, the government has indicated that it will borrow a total of GHS24.5 billion from the domestic market of which GHS20.7 billion will be used to service existing debt in the local market leaving the government with just GHS3.8 billion to finance other expenses.

Nonetheless, the Professor is optimistic that this could be averted if proper interventions are implemented.

“We have been too wasteful, we brought this upon ourselves, we are here because of our actions and inactions,” he said. “[But] we must come to that point where we’ll take charge of our own future, we can’t continue like this,” he added.

“It’s going to be difficult, much more challenging. But of course, there are interventions available to the government in terms of certain cost-cutting measures that we have to do, also to signal confidence in the economy and then also how the revenue envelope responds to the 2022 budget, both at the policy level and the administration and compliance with revenue measures,” he said.

Also, Bloomberg, in an article captioned – “Ghana Debt Moves Deeper into Distress as Investors lose Patience,” painted a gloomy picture of the economy.

However, government has has assured that the economy is still robust.

In a statement, the Finance Ministry noted that there are some serious factual errors in the article by Bloomberg, which may give investors some cause for concern, if not corrected.

“December revenue collections are seasonally the largest for any year, it is unlikely that our financing requirements in December will result in us exceeding 80% debt to GDP by December, 2021,” it added.

Again, “it is important to note that for the period prior to the COVID-19 global pandemic, Ghana experienced an average debt-to-GDP ratio of 56.4% from 2015 to 2019. In 2020, Ghana’s GDP grew by 0.4% because of the impact of the Covid-19 Pandemic on the economy. Financing of the additional Covid-19 related expenditures, in addition to revised revenue targets, due to the impact of the pandemic, led to an increase in debt-to-GDP from 62.4% in 2019 to 76.1% in 2020,” The Finance Ministry said.

In this article:: 'Ghana's economy' will 'collapse’ by Sept,It’s just a matter of 'time',Prof. Bokpin