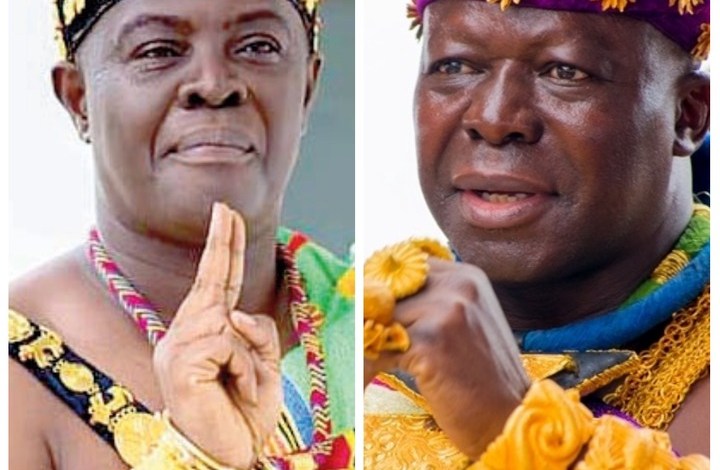 Even as the royal ‘conflict’ between the Asantehene Otumfuo Osei Tutu II and Dormaahene Osagyefo Oseadeeyo Agyemang Badu II deepens, it has emerged that the latter is on record to have stated that he will never disrespect the former.

A video shared by Accra-based Okay FM on its Facebook page saw Agyemang Badu II speaking extensively about why he continued to challenge the known historical narrative of the Ashanti and Dormaa people.

African Editors checks show that the said video was recorded last year even though many have misconstrued it as a response to recent critique directed at him by the Asantehene.

What the Dormaahene is heard saying:

In the said video published by Okay FM on January 19, days after Asantehene’s rebuke in which the Dormaahene was not explicitly mentioned, Osagyefo Oseadeeyo Agyemang Badu II, in his usual casual clothing, is seen speaking to a gathering.

“When we were coming into the public domain, they were talking about the history of Dormaa but they distorted some part of it so, I decided to straighten it”.

“Offinsohene openly boasts that his ancestors teamed up with the Asantehene to dominate us, he started it daily, did you hear me react, but I was here,” he stated.

On the specific issue of the Asantehene and his rebuke, the Dormaahene stated that he will never disrespect the King but that his statements were in pursuit of the truth – nothing more, nothing less.

“Otumfuo Osei Tutu II, the sole owner of Asanteman, our King, Your Majesty, once he sits on the Golden Stool and has a large following, I will never speak against him, but the truth is truth.

“Every day the things that he says at his Palace, I hear them but I only opt to be quiet. You see now that I fired one salvo, you are crying? I have lots of them but I threw one. You see you are pained? They should note that with all the recordings on social media, I can also speak,” Dormaahene stressed.

The two traditional leaders had become the subject of numerous media reports recently after the Dormaahene made comments relating to a distortion of history that in his view favoured the Ashantis.

In a stern response, the Asantehene at the first Council Meeting in Kumasi two weeks ago, stated emphatically among others that the Asante Kingdom has not forced any of its subjects to serve the Golden Stool but it is a rare privilege and honour for anyone to be considered a subject to the Golden Stool.

The Dormaahene, known for his public statements on history and even national issues.

In this article:but won’t disrespect Otumfuo-,Dormaahene,I've more ‘salvoes’ in my belly