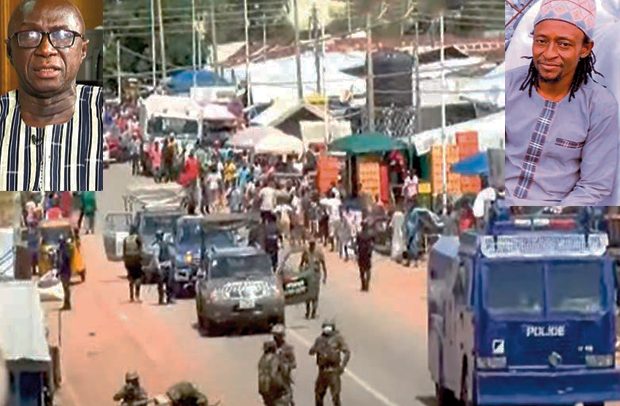 On 4th February 2022 it was brought to the attention of the Economic Fighters League that monetary compensation had been organised for the families of those murdered in Ejura in June 2021, in the aftermath of the murder of Fighter Mohammed Ibrahim Kaaka.

While Fighters acknowledges the efforts of those supporting the families, we must state that we are deeply concerned that extrajudicial monetary compensation serves to indemnify the state of its culpability in the murder of Kaaka and the #JusticeForKaaka Youth.

In order for justice to be achieved, punishment of offenders and monetary compensation must necessarily be ordered by the Judiciary through the appropriate legal mechanisms, and not by officials of the Executive under whose command these lives were taken.

History has shown that extrajudicial compensation most often serves as indemnification for the state perpetrators of injustice. Any effort to obtain justice by punishment of the offenders by the families of the murdered youth will now be curtailed, as was seen with the case of the Zongo Seven.

Justice by way of compensation and punishment of the offenders should only come from the Judiciary, the exclusion of which in yesterday’s efforts leads one to question the apparent disinterest of the Attorney General in bringing the state-ordered murderers to book.

The exclusion of the Kaaka family from yesterday’s disbursement serves as further evidence of the problem of extrajudicial compensation. Evidence on record shows that Nasiru Yussif and Murtala Mohammed were murdered by the Ghanaian military on the orders of the state while the youth were returning from Kaaka’s funeral in June 2021.

Another, Awal Misbawu, was badly injured and would eventually lose his leg. Their families have been subjected to indescribable pain, for which compensation – in as much as it will not bring loved ones back to life or lessen the trauma suffered – is in due order.

The Kaaka family has equally suffered; in fact they have arguably suffered more. In an effort to absolve themselves of blame, the state in 2021 chose to further perpetuate oppression and violence on them by arresting and charging Kaaka’s brother Iddi Mohammed with his murder. As we speak Iddi remains under remand, falsely accused of a murder which evidence has shown to have been politically motivated.

The decision of the state not to compensate the Kaaka family can be interpreted to mean the other families are only being compensated because the atrocities on their loved ones were perpetrated in broad daylight.

In this matter the state acts as a facilitator of injustice; it has killed a man, trivialised and dismissed the nature of the events that led to his murder, remanded his brother on false charges and is now denying the family compensation. His killers walk free.

*This is exactly why such processes must only be conducted and pronounced upon by our administrators of justice – the Judiciary.*

Justice for Kaaka has yet again been denied.

Fighters has remained in constant contact with the Kaaka family since our initial visit to Ejura in July 2021 when we delivered the Ghs 11,000 (mobilised with the support of the public) for all the affected families.

We were recently informed of the family lawyers’ request for an initial deposit of Ghs 15,000 pursuant to a High Court application for bail for Kaaka’s brother, without which the matter would stay pending. To this end we are now working with the family to mobilise the Ghs 30,000 required to entirely cover the legal costs.

Fighter Kaaka demanded better for Ghana, and lost his life for it. His family is now being punished for it. Ghanaians can not and must not rest until #JusticeForKaaka is achieved and the state actors responsible for this atrocity are brought to book.