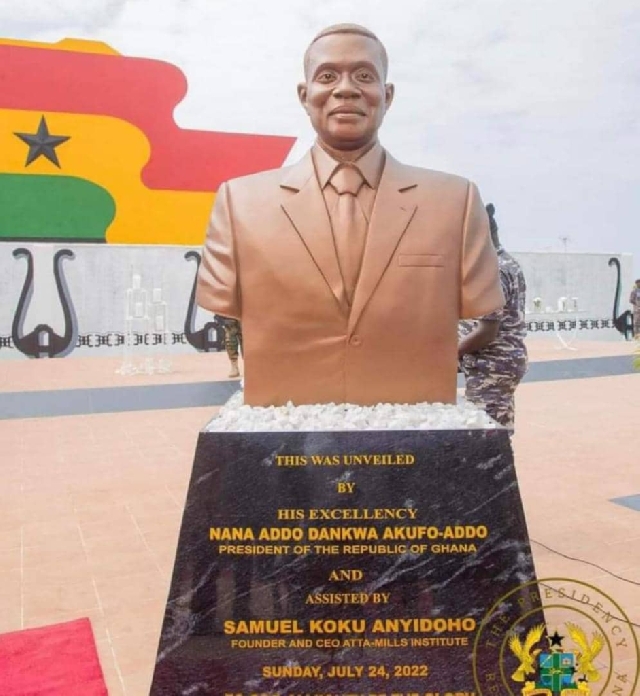 “I want the Ghanaian public to know that the Atta Mills Institute, so called, is unsanctioned, unappreciated and welcomed”, Dr Cadman Atta Mills, the Brother of Ghana’s late President Prof. John Evans Atta Mills has sharply reacted to Koku Anyidoho for embarking on a self-glorified project at the blindside of the family of the former Ghaianan Leader referred to as Asomdwehene, which translates a peaceful Chief or King.

A Lecturer at the Political Science Department of the University of Ghana Professor Ransford Gyampo has called for the removal of Koku Anyidoho’s name from late President John Evans Atta Mills’ bust.

According to the Political Science lecturer, Mr Anyidoho’s role in the commemoration of the 10th anniversary of the death of the late President, cannot be disputed.

He is however, of the view that, having Mr Anyidoho’s name on the bust makes it look too “clumsy and wordy.”

He added: “Koku’s role is known and can never be discounted. But in humility, it must be dropped in order not to make the writings on the statue too clumsy and wordy”.

There have been public sentiments about the bust of the late President.

The monument was unveiled at the Asomdwe Park on Sunday, 24 July 2022 and did not bear the name of the late President.

At a Press Conference held on Monday, 25 July 2022, Minority Leader, Haruna Iddrisu noted that it is offensive to have a bust that excludes the name of the late President.

“The bust of him, John Evans Atta Mills, our respected President, beneath the bust is not his name. It is that of President Akufo-Addo and that is not his [Atta Mills’] name and we find that incredibly unacceptable and offensive”, the Minority leader stated.

He therefore called on government to correct the names on the bust.