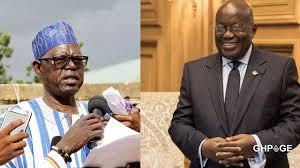 Kufuor, Mahama pick but whenever I call Akufo-Addo, ladies pick with no respect- Ndebugri

Former Member of Parliament for the Zebilla Constituency and Private Legal Practitioner, Hon. John Akparibo Ndebugri has expressed shock over the fact that he has no access to his old-time friend President Akufo-Addo upon assumption of power since 2016.

His outburst further suggests that since Akufo-Addo became President, finding the opportunity to consult with an old pal on subjects relating to national development has become very difficult and seemingly impossible.

The former Zebilla lawmaker claims that whenever he makes a call to the President on phone only women answer the calls telling him that he (the president) is unable to speak with him.

Mr Ndebugri finds this disrespectful and vows not to call him again since he’s now convinced that Akufo-Addo does not regard him as an old buddy again.

Speaking on a Bolgatanga-based A1 radio, he did, however, point out that while calls to former President John Mahama and Agyekum Kufuor are answered directly by them, the situation with Akufo-Addo is different.

“I will say he is my former friend because I haven’t met him for several years now so I don’t know whether he even considers me as his friend. I take the phone and I call President Kufuor, he answers but not this man (Akufo-Addo). His phone is with some ladies who will not even treat you with some respect. If you call President Kufuor, it goes to him directly, if you call Mahama it goes to him directly but not this man. If you call him, some ladies will pick up and tell you he isn’t around, and I don’t call people who don’t pick my calls promptly”.