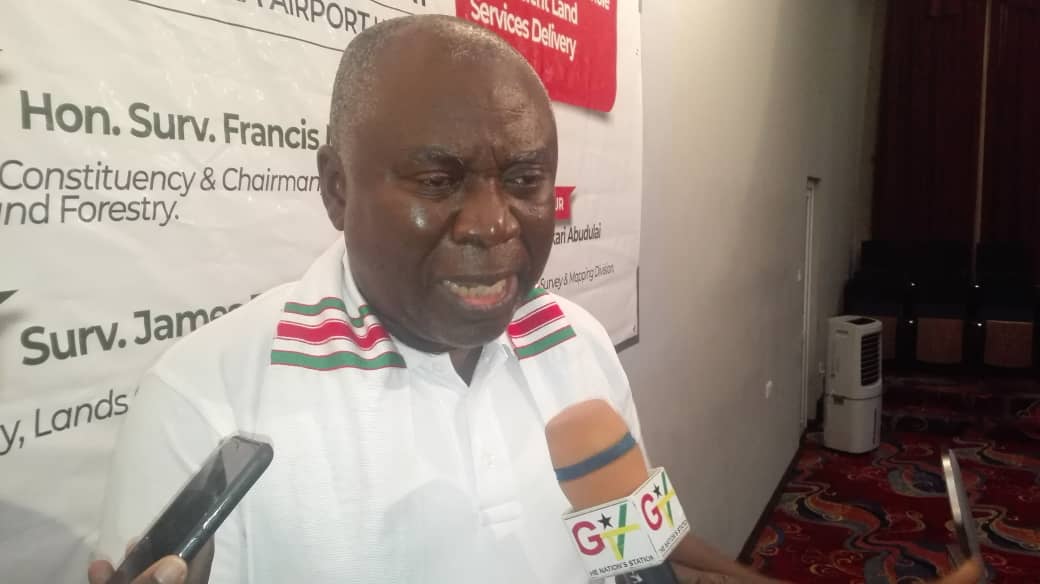 The President-Elect of the Licence Surveyors Association of Ghana Mr. Samuel Odame Larbi has extended thanks to the Almighty God for his favour, which has given him ” all the strength, to have the opportunity to attend this AGM and to vote, in this election and to all of you surveyors for voting for me. I also thank all the contestants for a decent contest. I will definitely put in my best to meet your expectations. We will work with all to achieve our goals. We thank Surv. Kwame Tenadu, lmmediate Past President, and his team for building us a formidable Association. Kudos, bravo, ayekoo”,

He charged Lisag members to be circumsperk in protect the new land law rather than money.

According to him, his vision as he have already stated is to see a strong LISAG, united in all decisions, taking a cue from the Bible verse Gen 11:6 which says “And the Lord said, Behold the people is one, and  they have all one language; and this they begin to do; and now nothing will be restrained from them, which they have imagined to do.” From this verse if we work together we can do great things as LISAG. I will provide an all inclusive leadership to bring LISAG to an association which will be consulted in critical national matters.

The provisions in the land Act 1036 which relates to provision of cadastral plans for land registration and court adjudications. I will ask members to work with the executives to ensure that we take control of all engineering and all other survey jobs which have been taken over by other professionals.

As said already branding is critical to the growth of any organization we will resource the PAC to expand their reach to several media outlets. We will seek to solicit articles and ideas from membership to brand the association to be in the mind of the public for all things related to land and national development. It is when we are in the limelight that we can charge fees that are commensurate with the efforts we put in our professional task.

In line with the branding, our office will have to be a center of excellence where anyone comes to, and goes back with a good impression about surveyors. We will evaluate what our predecessors have found and if satisfied acquire it else we will look for a land at a prime location to put up an edifice that suits our brand.

He noted that the welfare issues for members will be seriously pursued for both old and young members. We will encourage members to form companies, to enable them bid for government jobs and also present a formidable image when they meet landowners to solicit jobs as licensed surveyors for Stools, clans and families. This will also enable us to employ the new graduates from the survey institutions to first acquire experience, and also curb the menace of quacks. Since our old members who have been signing for these quacks, will have a company with competent qualified surveyors working for them, and making good income, they will not be interested in signing for a pittance.

According to him, to achieve this vision and goals, we need you all to give your best ideas and effort and always think that LISAG is your company, and you as a shareholder, and are obliged to always seek the best interest of association.

Meanwhile the immediate past President Mr.Surv.Kwame Tenadu said the Lands Commission is embarking on a Land Reform Agenda. As part of this process, they have been able to digitize 10% of the records in Accra covering four Title Registration Districts Namely.

According to him, the Land Administration in Ghana is very complex, looking at the Land tenure system in Ghana and the fact that about 80% of the Land mass is owned and managed by the traditional authorities, clans, families and individuals with only about 20% managed by the Lands Commission.

This shows a clear indication that Lisag and it members has a huge tasks ahead of them in terms of who owns what.