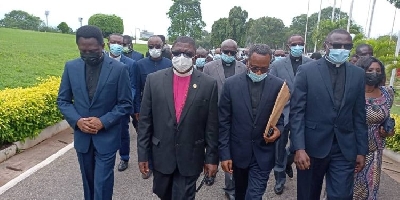 LGBTQ+ BILL: Church of Pentecost, 5 others present petitions to parliament.

Christian Clerics led by the Chairman of the Church of Pentecost, Apostle Eric Nyamekye have appealed to parliament to speed up passage of the Proper Sexual Human Rights and Ghanaian Family Values Bill into law.

The want Parliament to shut doors to homosexuality in Ghana.

The Church of Pentecost led by its Chairman and 5 other Christian organizations have today presented petitions to parliament to support the passage of the Proper Sexual Human Rights and Ghanaian Family Values Bill into law.

Apart from the petition, the Church of Pentecost has also presented six memos and 6,000 signatures of church members, students, theologians to encourage parliament to pass the Bill into law.

Speaking after presenting the petitions to parliament Chairman of the Church of Pentecost Apostle Nyamekye  said “Promoting gay rights is an insult to God’s intelligence. We’re not concerned about now, our concern is about the future where people will be prevented from propagating the gospel”.

Parliament has since received over 100 memos in and outside after the LGBTQ+ was introduced into parliament.

The growing supports for the passage of the Bill into law comes at the time a coalition of 18 Professors and lawyers led by President Akoto Ampaw, Prof. Audrey Gadzekpo, Prof. Kwame Karikari, Prof. Raymond Atuguba, Dr. Yao Graham, Prof. H. Kwesi Prempeh, Dr. Kojo Asante, Dr. Gyima Boadi and others have presented petition in strong opposition to the Bill.

According to them, the bill if passed into law, will curtail fundamental human rights, breaching relevant portions of the 1992 Constitution.

Akoto Ampaw noted that “The sponsors of the Bill are being fanciful and that it is unbecoming of a parliament that is accepting a bill that is against existing laws on human rights.

But, Sam Nartey George said the opposition to the Bill is dead on arrival and outmoded by birth.