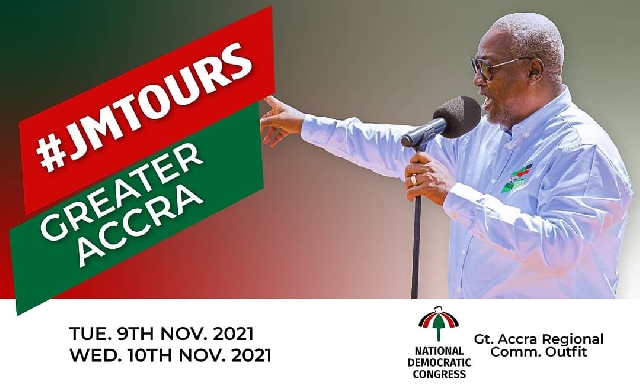 Ex-President John Dramani Mahama is expected to kick off his Thank You Tour of the Greater Accra Region on Tuesday, November 9, 2021.

The former Ghaianan Leader John Mahama took his tour to the Upper West, Oti, Eastern, Western, Western-North, Volta, Upper East Regions and others, as part of his arrangement to say bravo and bingo to voters for the over 6 million votes the party garnered and 137 seats won in the December 7 2020 Presidential and elections.

The EX-President John Mahama is expected to meet and interact with supporters, constituency executives of the party.

He will also pay a courtesy call on many religious, traditional leaders, opinion leaders, the leadership of the Christian faith, Muslims community and Zongo chiefs among others.

The Greater Accra communications office of NDC) revealed that the former president will be touring the region for two days.