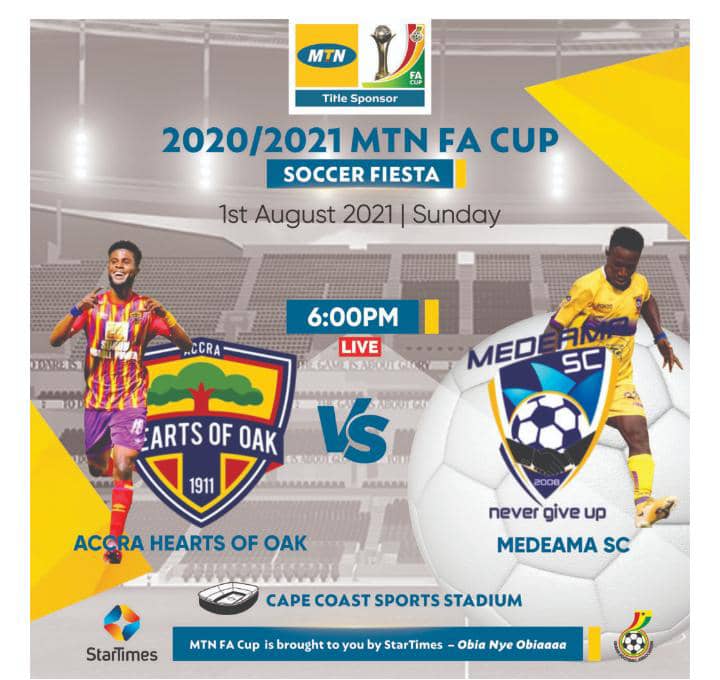 Ghana Football Association(GFA) has announced that the semifinals matches of the MTN FA cup will be played on Sunday, 1st August 2021 at the Cape Coast sports Stadium, where Chelsea and Ashgold will battle it out at 3pm and later at 6pm, Hearts of Oak and Medeama will also lock horns.

The GFA communications made it known on their website, ghanafa.org
“MTN FA Cup: Semifinal matches to be played Sunday”.

Berekum Chelsea – 2010/11 semifinalists will battle former champions AshantiGold SC at 3pm. Record holders Accra Hearts of Oak (10) who eliminated Elmina Sharks from the competition at the Quarter final stage will battle two-time winners Medeama SC at 6pm.The Winners will progress to the final on Sunday, August 08, 202″.

The most successful club in the FA cup Hearts of Oak is hoping to win the FA cup in addition to the League trophy, and are in high spirit after defeating Elmina Sharks by 1 goal to nill at their own home ground.

Medeama SC who was tipped to lift the league trophy but couldn’t, will want to compensate their fans by winning the FA cup, and the wouldn’t come on a silver platter, as they will have to beat the hell out of the current league champions, Hearts oak.

Kumasi Asante Kotoko conquers, Berekum Chelsea, will have to overcome come another Ashanti club Ashgold to make it to the final.