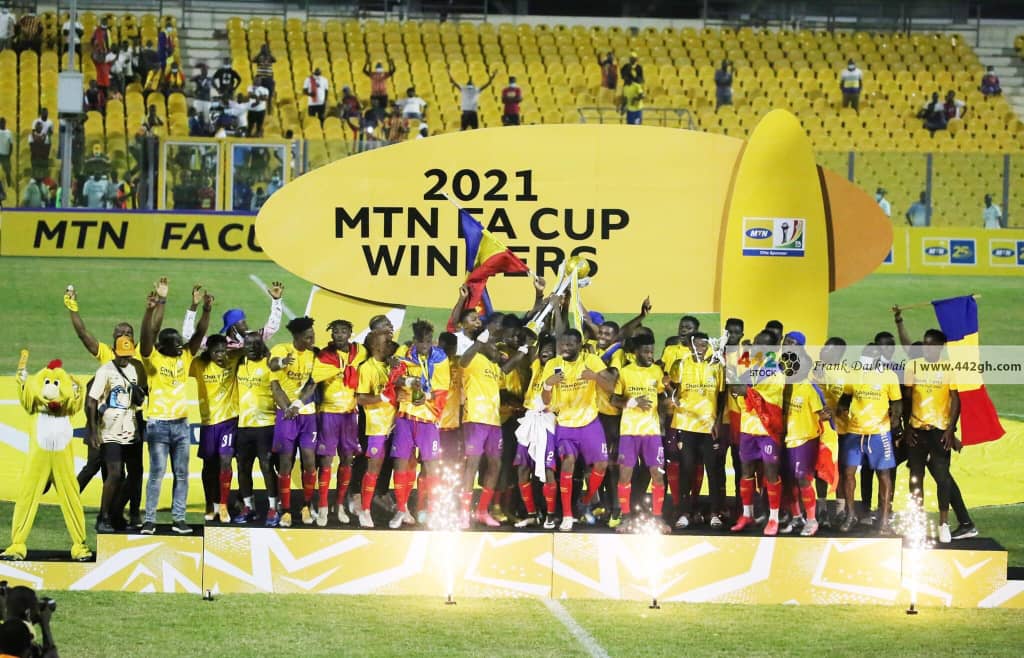 MTN FA Cup: Hearts edged AshGold in a marathon shoot out to win the FA cup.

League Champions Accra Hearts of Oak, has beaten Obuasi AshGold in a marathon penalty shootouts 8-7 to win FA cup for the eleventh time in their history.

The match started with an earlier incursion from Hearts of Oak, but AshGold goalkeeper Kofi Mensah was swift to stop any danger. AshGold earlier plans to sit back and catch Hearts on the break, didn’t work out.

After 15 minutes into the game, AshGold opened up and controlled the midfield with their incisive passes which created lot of problems for Hearts.The first half ended without any clear cut chances from both sides. It was mainly physical and midfield battle.

AsGold in the second half continue their dominance and created one decent chance which nearly resulted in a goal, but the defenders recovered on time to deal with the situation.

In the extra 30 minutes, both teams stringed passes together neatly but couldn’t make good use of the chances that come their way. There was a penalty shout in the last 10 minutes of the extra time when Emmanuel Nettey was brought down in the AshGold penalty box, but the referee was not interested. After 120minutes and still no goal, the match had to travel to penalty shootouts.

Hearts started the shootout well after scoring first two of their shoot while AshGold misses one. Hearts missed the third and scored the fourth. Afriyie Barnieh was last person to kick, with him scoring will mean Hearts are champions, but he missed it. This made it still open for both clubs.

AshGold at a point thought they have won after Hearts missed, only for Hearts goalkeeper Richard Attah to make an incredible save to keep Hearts in it. Attah then hit a bullet with his left foot to put Hearts ahead. AshGold goalkeeper, Kofi Mensah ballooned his kick into the Sky to give Hearts the victory.

Hearts are champions of 2020-2021 MTN FA Cup. They have already been crown as league champion. Today’s victory means Hearts have won their sixth double.