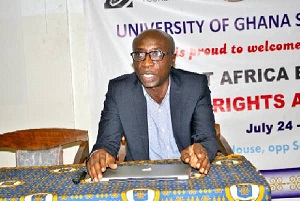 On October 20, 2021, students of the University of Ghana had the opportunity to go to the polls to elect new executives for the Students Representative Council. This is in exercise of their statutory rights as students to determine who should lead them and become their mouthpiece on councils and boards on the campus, including the governing Council of the University of Ghana.

However, the electoral process was marred by the presence of national security personnel who invaded the campus of the University of Ghana without the knowledge, consent and authorisation of university management.

In an interview by a JoyFM journalist with the Director of Public Affairs of the University of Ghana, Elizier Taiba Ameyaw-Buronyah, on this matter, she is reported as having said that the presence of the security officials was there to help keep the calm and that it was not possible for national security to influence the outcome of the elections. This was despite the fact that the Director of Public Affairs had confirmed that the national security personnel did not seek or obtain permission from the university authorities before entering the campus to monitor the elections.

Unfortunately, the position of the Director of Public Affairs is not supported by the Basic Laws of the University of Ghana. Universities are entitled to the enjoyment of their institutional autonomy which includes the fact that the campus is out of reach by security personnel except where invited by the university management itself. This invitation could be based on intelligence shared by the university or the security agency.

She is further quoted to have said, “I don’t agree with this submission made by students. When there are elections, the university security is around to ensure that everything goes on well. Anything can happen when there is an election.” This statement is also equally faulty because as the Director herself rightly said, the university has its own security and where it needs reinforcement, it can then call on the police, in this case, most naturally, the Legon Police Station, which in turn could call for reinforcement, if need be. Until then, no security agency has the power to enter the university campus.

Article 14 of the Kampala Declaration on Intellectual Freedom and Social Responsibility provides that “The State shall not deploy any military, paramilitary, security, intelligence, or any like forces within the premises and grounds of institutions of education.” The provision goes on to say that where such deployment is necessary “in the interest of protecting life and property” the following conditions shall be satisfied. One, there is “clear, present and imminent danger to life and property.” Two, the head of the institution concerned has extended a written invitation to that effect. Three, that such invitation “has been approved by an elected standing committee of the academic community set up in that behalf.”

Clause 19 of the UNESCO Recommendations on the Status of Higher Education Personnel (1997) also stipulates that, “Member States are under an obligation to protect higher education institutions from threats to their autonomy coming from any source.”

This interference by the national security details therefore violates the rights of not only the students but the university itself as well as academics, who come together to constitute the academic community.

However, zeroing in on the students who were directly affected in this case, the following aspects of the students’ right to academic freedom have been violated. That is, the freedom to criticise and make claims on the government, university management and academics. Therefore, attempts by government to influence the choice of leadership among students is to co-opt the student leadership and directly or indirectly influence them to do the bidding of government.

This underhand tactic by the government undermines democracy not only on the campus but also in the general society. Apart from it preventing the students to play their vanguard role as a check on abuses by government, university management and academics, it does not help in inculcating the true values and principles of democracy in the students. Therefore, they are likely to go out into the world, upon graduation, with a caricatured understanding of democracy which they are going to put into practice.

It is for this reason that the intrusion of the university space by national security details cannot be defended in any way by the university management and, therefore, should be condemned in the strongest terms.

Consequently, I expect that all the actors in the academic community – university management, academics (through UTAG) and the students (through the SRC, the Graduate Students Association of Ghana (GRASAG) and the National Union of Ghana Students (NUGS), should express their disquiet about this development and send a strong message to avoid its repetition.