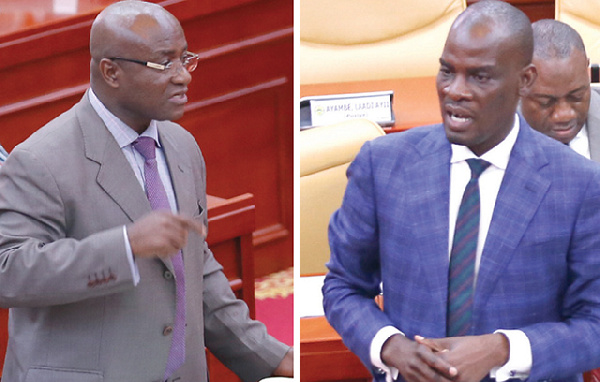 There is a sharp division among Majority and Minority MPs of Parliament on the attempted arrest of Madina MP Francis Xavier Kojo Sosu who escaped arrest twice after the police pursued him at his church in a bid to round up the Human Rights Lawyer and put him behind bars but hits a deadlock.

The police has proceeded to court to charge Xavier-Sosu for obstructing highway and causing damage to public property during a protest he led his constituents to embark on over deplorable roads within his constituency after the Speaker turned down request from the police to release Xavier-Sosu for questioning, raising procedural impropriety.

Xavier-Sosu is expected to appear in court on November 8. But, even before proceedings begin on the matter , both Majority and Minority MPs divided over the matter with the NPP MPs accusing Speaker of Parliament of acting unconditionally by deliberately refusing to release Xavier-Sosu for the police.

In what appears to be a jump into the defence of their own, NDC MPs are accusing the police of disrespecting parliament and the Speaker.

Majority Caucus in Parliament has called on the Speaker of Parliament, Alban Bagbin, to stop changing the rules to protect Madina MP, Francis Xavier-Sosu, from the police.
In a statement, the majority stated that failure of the Speaker to release the embattled lawmaker to police for investigation like his predecessors did is troubling.

The statement said: “The Majority Leadership views the foregoing response by Speaker Bagbin as a troubling departure from how his predecessors handled such requests. To avoid doubt, when both Rt. Hons. Joyce Bamford Addo and Edward Doe Adjaho received those requests during their days in office, they responded by inviting the relevant MPs, held discussions with them, and then asked them to report the requesting Police or investigative authorities.

“Again, during his tenure as Speaker, Rt Hon Professor Mike Oquaye modified the arrangement, including making the Speaker’s Conference Room available to the Police to meet with MPs they were interested in and to conduct initial investigations. He did this to protect the dignity of MPs while at the same time ensuring that MPs are not put above the law.

“Now the Speaker of Ghana’s Parliament, Rt. Hon Bagbin, appears to be instituting new rules that seem to undermine the Rule of Law without any prior discussions with the Leadership of the House. We ask: What exactly has changed? As a group, the Majority believes firmly that constitutionally guaranteed immunity for MPs in our democracy must not only be protected always but jealously guarded as well. However, never should we, as a Parliament, make the mistake of allowing immunity to be construed to mean impunity.”

The speaker has refused to release Xavier-Owusu to the police for investigation after the MP led his constituents to demonstrate over poor roads in his constituency.

The Police after several failed attempts to arrest the MP have obtained a court summons and charged the MP with obstructing the highway and causing damage to public property.

The Speaker in a letter told the Police that to arrest a sitting MP, the appropriate procedure is to secure from the Speaker, a certificate that the MP in question is not attending to Parliamentary business.

He noted that anything short of this will not be entertained by Parliament.

Mr Bagbin stated that the immunities and privileges of MPs are not absolute but the procedure for causing the arrest of a sitting MP must be in accordance with the constitution.

First Deputy Whip Ibrahim Ahmed has called for the need to build strong and effective linkages and collaborations among the various state institutions in the country in order to consolidate the gains of the country’s 29-year-old democratic journey.
The Banda Member of Parliament Ahmed Ibrahim gave the assurance that Parliament will not frustrate the business of the Executive underscoring that the House will never compromise its positive relationship with the other arms of government in the quest to strengthen its independence.

He indicated that while efforts are made to strengthen the independence of Parliament to give Ghanaians the true sense of the democracy that they voted for, the House will not work to frustrate the business of the Executive or any other state institutions.

According to him they have resolved to build a healthy and fruitful relationship with all other state institutions to ensure the existence of a cordial relationship so as to sustain the democratic path the country has chosen to embark upon.

The First Deputy Whip made this submission in Parliament today, Thursday, 4 November 2021 on the heels of the brouhaha surrounding the alleged attempted arrests and harassment of the MP for Adenta Constituency Francis-Xavier Sosu and a press statement issued by the Majority NPP Caucus in Parliament.

Francis-Xavier Sosu had to escape after police officers attempted to forcibly arrest him while leading a demonstration with some youth in his constituency on Monday, October 25 and later filed a complaint against the police in Parliament.

It is believed that the basis for his arrest was the fact that some demonstrating youth blocked some roads, which were later removed following the MP’s intervention.

Francis-Xavier Sosu, escaped another arrest on Sunday, October 31, at the Believers House of Prayer Ministries in Madina when, according to party supporters who massed up at the church, security personnel surrounded the church in an attempt to arrest him while he was worshipping in the church.

The Deputy Majority Leader Alex Afenyo-Markin in response called for a peaceful co-existence and cordial relationship between the two sides of the House as it awaits the return of the Speaker and the two House Leaders who are on parliamentary duties outside the country.

He added that the synergy this has generated in the working relations among the leadership of state institutions translates into the successes that have been achieved in resolving very delicate and thorny issues that from time to time, confront the nation

The Second Deputy Speaker Andrew Asiamah Amoako, presiding on behalf of Leadership entreated members to remain calm and be committed to the peace and delivery of good and services that their constituents so much desire.