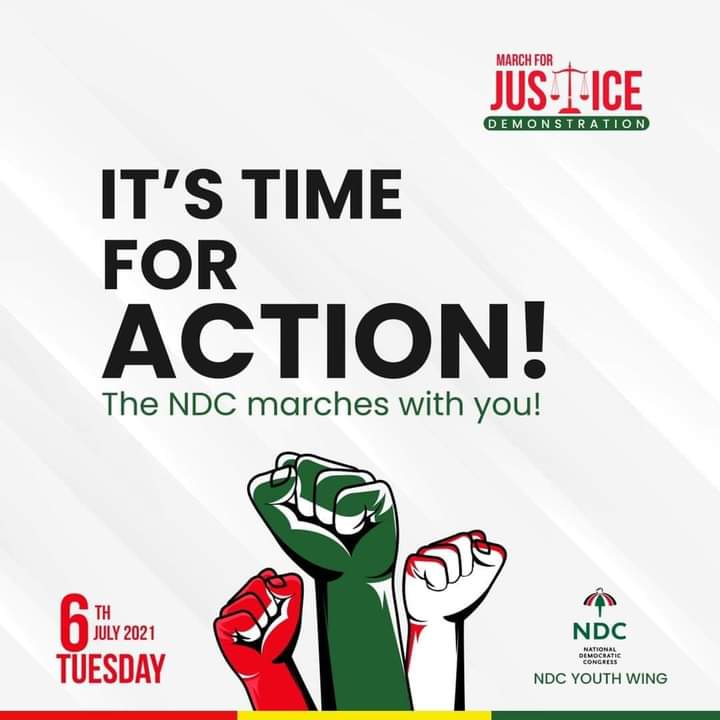 Biggest opposition National Democratic Congress (NDC) will hit the streets of Accra the capital today Tuesday July 6 over justice for persons who have suffered military and police brutalities under Akufo-Addo-led administration.

Known as ‘A March for justice’, the protest is also meant to pile intense pressure on government to fix burning issues facing the country since assumption of power by President Akufo-Addo-Bawumia regime.

The IGP James Oppong-Boanuh has since given the green light that his officers will protect the protestors to ensure safety upon threats of court action by the NDC.

According to National Organizer of the party, George Opare Addo, the protestors are expected to assemble at Accra Mall area and will march to parliament, other places and finally end at the Jubilee House-the seat of government to present a petition on their demands to fix insecurity, dismissal of the IGP, Ejura MCE and more.

Meanwhile, Member of Parliament of Bawku Central Mahama Ayariga says there is a creeping culture of silence in Ghana imposed by the governing party.

Speaking in an interview monitored by African editors on Monday 4 July 2021 in Accra, the former Environment, Innovation, Science and Technology Minister insists “all sorts of machinations have been set in motion to undermine freedom of speech and expression, a creeping culture of silence”

Mr. Ayariga noted that “We as the biggest opposition party cannot sit unconcern when people can’t express themselves. The demo is urgent”.