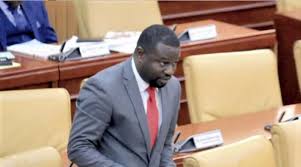 Below is their full statement:

THE POLICE AND NATIONAL SECURITY SHOULD INVITE HON. ANNOR-DOMPREH FOR HIS COUP COMMENTS

We have laid hands on a tape by Hon. Frank Annor-Dompreh, MP for Nsawam Adoagyiri constituency implicitly suggesting that parliament is preparing a fertile grounds for an impending coup detat or a Military Junta similar to what is happening in other Ecowas States.

This, the Youth in Nsawam Constituency, considers a serious statement that warrants police arrest of the Law maker for serious interrogation.

The NPP chief whip’s frustration comes at the back of an obnoxious E-Levy bill the NPP MPs are fighting tooth and nail to see it passed by parliament.

Fiercely opposed to this, is the Minority National Democratic Congress (NDC) MPs who have also resolved to stand by majority of ordinary Ghanaians to ensure that this bill does not get passed by Parliament. The entrenched positions taken by these two parties have left many Ghanaians divided sharply on what the way forward should be.

Hon. Frank Annor Dompreh who is also the Majority Whip in parliament spoke on Fawe Fm, an Nsawam based radio station and shockingly said that; ‘..the way we are heading, we the MPs are setting the stage for a military intervention to happen’. This statement has consequently been published by several media outlets.

A military intervention in Ghana? So we are asking; is this a threat or something the NPP have planned to do to disrupt the democratic structures of this country following their abysmal performance as a government?

As citizens of Ghana, we are already alarmed by the recent incursions of Military interventions in the sub-region, the most recent one being the case of our neighbouring Borkina Faso and we feel that the mentioning of it by our frustrated member of parliament should not be taken on the face value.

What he seem to suggest is dangerous and is not good for our country. We wonder why Hon. Dompreh would not call for a stronger consensus to be built so as to see parliament moving from the rubber stamp impression to a more formidable people’s representation, but would rather threaten Military intervention? How did this idea come to him so handy? What are they planning? A military intervention in Ghana because of what? Is his suggestion part of a grand plan to perpetuate themselves in power after such an economic failure?

From psychological forecast, Frank Annor Dompreh is rather setting a stage and preparing our minds for a possible implementation of a plan they may have hatched.

To clear doubts in the minds of Ghanaians, Hon. Dompreh should be invited by the police and the National Security for questioning. It is important they do this so as to unravel the real motivation of an MP to covertly opt for a coup instead of other democratic ways in their unsuccessful attempts to see a bill passed quickly. Such imaginations, ideas, suggestive preferences like this must not go without scrutiny.

We await urgent response and action from the police in whose safety the state and our democracy has been entrusted.
God bless our homeland Ghana.

In this article:NDC Youth Wing,Nsawam-Adoagyiri,wants MP probed over coup remarks