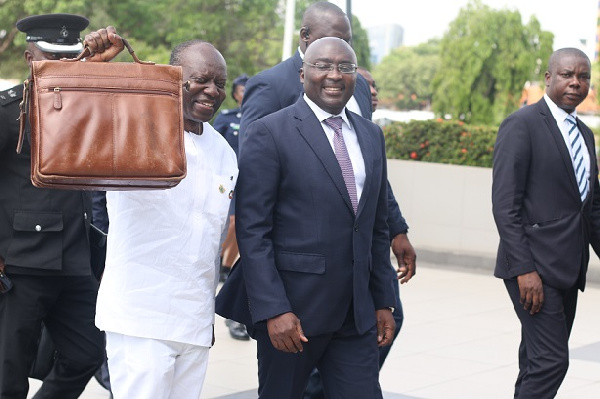 Parliament of Ghana on Friday evening rejected the 2022 Budget Statement and fiscal Policy after Speaker of Parliament Rt. Hon. Alban S.K Bagbin was forced to suspend sitting for five minutes after the Majority side walked out in protest to the presence of the General Secretary of the main opposition National Democratic Congress (NDC), Mr Johnson Asiedu Nketia.

The Majority Caucus insisted that Mr Nketia, who was seated in the public gallery of the chamber, should be walked out of the house in the same manner that the Speaker asked the Marshall to walk out certain non-MPs of the house.

The Minority side fought back saying Mr Nketia was not going anywhere.

The standoff degenerated into chaos on the floor of the house and the Majority side then staged a walkout.

The lopsided house later reconvened for the business of the house to continue.

The budget was then rejected.

Earlier in the afternoon, the Majority side of the house was empty while the Minority side was full ahead of today’s vote on the 2022 budget statement.

Speaking to the parliamentary press corps ahead of the budget vote, Mr Annoh Dompreh of the Majority caucus explained that his side of the house is not yet seated because their caucus meeting was interrupted by an invitation from the Speaker of Parliament, Mr Alban Bagbin, to a meeting with both leadership sides of the house.

After the meeting, he said they were now to continue with their caucus meeting before entering the chamber.

He, thus, admonished the Minority side against doing propaganda with the situation.

He also pointed out that the salaries of public and civil servants as well as many Ghanaians, depends on the passage of the budget, which he noted the Majority side was committed to doing.

“The significant matter today is not lost on us and we in the Majority are saying that the approval of this budget goes to the core of the welfare of the Ghanaian people; salaries of MPs, salaries of a significant portion or part of our population, public servants, is dependent on this budget”.

“They’ve bared their teeth, they’ve made it abundantly clear that they are against it, we’ve heard them, we know all the schemes, we are aware of that but I can tell you we are carry the strong aspirations of the people of this country and those aspirations are that we want to ensure that we pass this budget to give these public servants the needed liquidity for them to prosecute state functions and for their welfare, too”, he added.

Meanwhile, Mr Ahmed Ibrahim of the Minority side also told journalists in a counter press encounter that: “It’s unfortunate; I’ve heard the majority side saying that the minority are trying to play propaganda with the government’s financial policy and economic statement. That is very bad”.

“We are a very serious and responsible opposition and we did that simply because the house was adjourned yesterday to 10 am this morning, so, everybody has been whipped to come to the chamber, come to the caucus meeting then proceed to the chamber and that is why you yourselves can witness or see with your naked eyes that one side of the house is occupied, the other half is still vacant”, he noted.

He said: “We are in the Minority and it is our responsibility to help our brothers in government to govern. You, who are bringing your motion, you who [have to] move your motion, have vacated the house. Can Ghanaians take you seriously?”

“If you are not ready to govern, let us know but you can’t say that: ‘Oh, the Minority are making propaganda with the budget’. Do we have a financial economic policy to move? No”.

“You [media] take your cameras to the house and check; why is it that one half of the house if full and the other house is not there?”

“We are 137, I’m a deputy minority chief whip; my leader, the Hon Haruna Iddrisu made sure that by 9:30 am, all of them had reported to the chamber and had signed except one who was on his way coming and right now as I speak to you, he’s there, so, we are waiting. Let nobody say we are making propaganda”.

“Have you ever seen a budget approval being handled this way before?” he asked, to which he answered: “Never”. “So, they should exhibit leadership by example. If you can’t govern, give us the power. Don’t tarnish our image and reputation. The more you wait, the angrier you make the youth of this country to be. The hungrier you make drivers, mortuary men, university students etc”.

“They are 137, we are 137, plus one independent one; we, in the Minority are saying that from 2017 to date, the National Communication Authority, who was insisting on the implementation of regulatory laws, has not even complied with the National Communications Law itself, the Electronic Transactions Law; his audited accounts from 2017 to date have never come to his house, so, you yourself, who said Radio Gold was not compliant, who said Montie was not compliant, almost 132 radio stations were not law compliant, we’ve been worrying you from 2017 to date, ‘bring your annual audited accounts’, till date, you’ve not brought it. You are not accountable and you say we should give you e-levy?”

The 2022 budget rejection presupposes that the Finance Minister Ken Ofori-Atta would have to return to parliament with a new budget for approval before parliament is dissolved by end of December 2022.

Below is a statement issued by the Speaker Bagbin today after the budget was rejected: