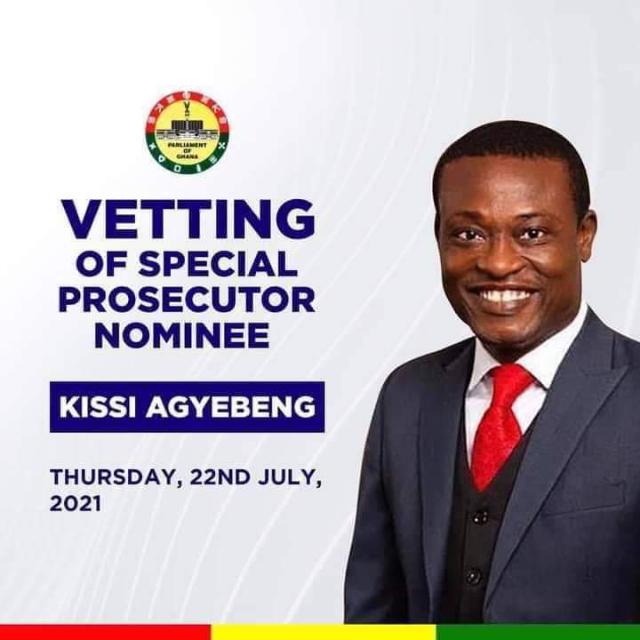 If approved, the University of Ghana School of Law Lecturer will become the second Special Prosecutor after Martin Amidu who resigned over alleged interference in his work by President Akufo-Addo and government’s after risk assessment of Agyapa Deal.

Office of the Special Prosecutor became vacant after Martin Alamisi B. K Amidu resigned in the run up to crucial 2020 polls over alleged interference in his risk assessment of controversial Agyapa Deal by President Akufo-Addo and government’s machinery.

Even before Kissi Agyebeng is vetted and approved by vetting Committee of Parliament Martin Amidu says the independence and impartiality of the newly nominated Special Prosecutor is questionable.

Mr. Amidu in a document revealed that Kissi Agyebeng has closed ties with Gabby Asare Otchere-Darko and current Attorney General who are in support of the controversial Agyapa Deal also referred to by the latter as the most corrupt of all deals in the history of Ghana.

Apart from that, Martin Amidu is questioning the mood of appointment of Mr. Agyebeng through the current Attorney General and Minister of Justice contrary to his past appointment by President Akufo-Addo and suspects foul play.

“If this man, Kissi Agyebeng is linked to Agyapa Deal, I think non-partisan body to advertise and come up with independent person to occupy office of the Special Prosecutor, ” he said.